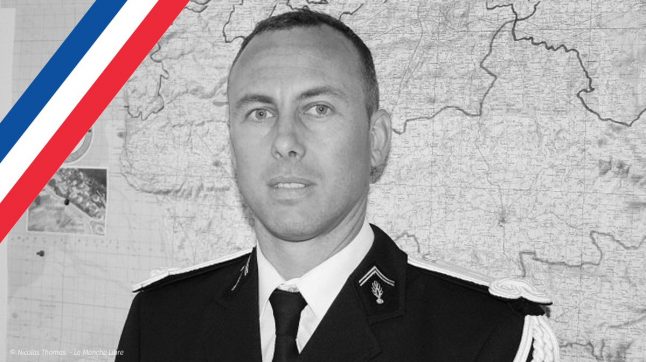 “Lieutenant-Colonel Arnaud Beltrame has passed away. He died for his country. France will never forget his heroism, his bravery, his sacrifice,” the minister wrote on his Twitter account.

Beltrame was shot and stabbed after swapping himself for a hostage in a rampage and siege President Emmanuel Macron branded “an Islamist terrorist attack”.

Macron led tributes to Beltrame, saying he had “died a hero” and deserved “the respect and admiration of the whole nation”.

The national gendarmerie said its flags would fly at half-mast on Saturday in tribute to the slain officer, while a white rose hung on the door of his own base in Carcassonne.

He died of his wounds Saturday, becoming the gunman's fourth victim.

In a statement from the Elyséé presidential palace, Macron also praised the “exceptional courage” of Beltrame.

“The President of the Republic has learned with great sadness the death of Lieutenant-Colonel Arnaud Beltrame during the night from injuries received in the exercise of his mission.
“By offering himself as a hostage to the terrorist entrenched in the Trèbes supermarket, Lieutenant-Colonel Beltrame saved the life of a civil hostage, showing exceptional courage and exceptionality.
“At the heart of the action, Lieutenant-Colonel Beltrame has shown exceptional coolness and illustrated the military virtues in a vivid manner, which deserves the respect and admiration of the entire nation.”
“Lieutenant-Colonel Arnaud Beltrame died in the service of the nation, to which he had already given so much. By giving his life to put an end to the murderous pursuit of a jihadist terrorist, he has fallen as a hero.
“The President of the Republic extends his most sincere condolences to his widow, his friends, and his brothers in arms. He calls every Frenchman to honor his memory.”

Arnaud Beltrame put himself in harm’s way to save another human being. It cost him his life. We all owe a huge debt of gratitude to this hero. pic.twitter.com/SC8Z2cyQjP

The gunman, identified as 26-year-old Redouane Lakdim, shot dead two people at the supermarket after earlier opening fire on passengers in a car, killing one of them, and injuring a police officer in nearby Carcassonne.

Speaking at the scene on Friday Interior Minister Gerard Collomb said a police team immediately intervened after the start of the siege at around 11 a.m.

They managed to get some of the people out,” he said, but the attacker kept one hostage back as a human shield.

Beltrame then offered to take the hostage's place and remained holed up with Lakdim while negotiations to end the standoff continued.

The officer “left his telephone on the table”, to allow police that had surrounded the building in the sleepy town of 5,000 inhabitants listen in, Collomb said.

“When we heard shots the GIGN (an elite police force) intervened,” the minister said.

Beltrame's name was the top trend on Twitter on Saturday morning as people in France and around the world lined up to pay tribute to the gendarme.

I don’t like the word hero. It’s overused. But my god is it applicable here. French gendarme Arnaud Beltrame handed himself over to an ISIS-inspired gunman yesterday to save a hostage’s life. In the ensuing raid, he was shot & spent the night fighting for his life. He just passed https://t.co/I1FvnLpfCH

The face of a true hero of France. A nation in your debt. Lieutenant Colonel Arnaud Beltrame. RIP. pic.twitter.com/gTkI6wkhLe

This is Lieutenant Colonel Arnaud Beltrame. A French police officer. Yesterday he voluntarily took the place of a female hostage in a terror attack. It’s now been confirmed he was killed. Hero. pic.twitter.com/4u6tt0w0nw

The attack has rocked the normally sleepy town of Trebes, which went on lockdown Friday with heavily armed and masked police carrying out a massive operation in Lakdim's neighbourhood.

In Paris, the Eiffel Tower dimmed its lights at midnight in a mark of respect for the victims and a minute's silence was held at the Stade de France before a football match between France and Colombia.

Friday's violence took place in a part of France still scarred by a killing spree in 2012 in the city of Toulouse and nearby Montauban where another jihadist, Mohamed Merah, shot dead seven people including three Jewish schoolchildren.

That assault marked the first of several big Islamist attacks in France since 2015, including the massacre at the satirical newspaper Charlie Hebdo, the November 2015 attacks that killed 130 in Paris, and a summer 2016 truck attack during Bastille Day festivities in Nice.

The most recent assault came in October when a Tunisian man stabbed to death two women at Marseille's railway station, shouting “Allahu Akbar”.

A state of emergency put in place just after the 2015 Paris attacks was lifted last October when Macron's centrist government passed a new law boosting the powers of security forces.