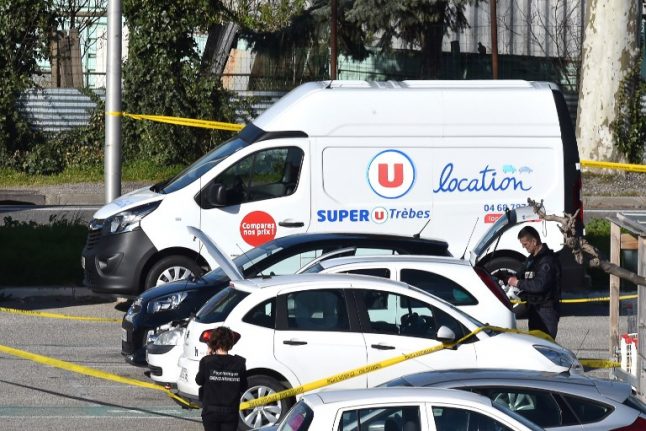 A vehicle (C) is cordoned off, believed to belong to the hostage taker Photo: AFP

On Friday morning news broke of separate incidents in and around the historic town of Carcassonne, south west France that were later linked.

In the first incident the attacker hijacked a car in Carcassonne, opening fire on the driver and the passenger. The driver was left seriously injured and the passenger dead. He then hid their bodies in bushes.

Then the man drove a vehicle at high speed towards a group of four CRS policemen who were jogging in Carcassonne. He had apparently been following the police who were based in Marseille but were on placement in the historic town.

He then opened fire, firing five shots and leaving one of the officers injured on the shoulder. Police said the bullet passed 3 cm from his heart but the injured man is not believed to be in a critical condition. After attacking the police the gunman then drove the vehicle 8 km away to the nearby town of Trèbes where he opened fire in the Super U supermarket while shoppers were inside. Two people were killed with the victims believed to have been a member of staff and a customer.

The gunman then took an unknown number of shoppers hostage.

Many other customers fled trough emergency doors and took refuge in a nearby Peugeot garage.

It then emerged the gunman still held one shopper hostage inside the store but agreed to release the shopper in exchange for a policeman. Before entering the supermarket the officer had called a colleague and left the call open so his specialist commando officers could hear what was happening inside the store.

Interior Minister Gerard Collomb said that just after 2.30 pm police launched a raid on the supermarket when they heard shots being fired. The gunman was killed in the assault but the officer who had been exchanged for the hostage was left seriously injured after being shot.

As well as the three killed 5 were shot and injured in the attacks, including two seriously. Was it a terror attack?

Several witnesses reported that the gunman shouted “Allahu Akbar” as he opened fire in the supermarket. The cry which means “God is great” in Arabic has been uttered by jihadists in previous terror attacks.

French prosecutors then quickly announced that the gunman had claimed allegiance to the Islamist extremist terror group Isis and that they were treating the incident as a terror attack.

Specialist anti-terror prosecutors in Paris took charge of the investigation and Prime Minister Edouard Philippe also said: “Everything points to this being an act of terrorism.”

Following the police raid that killed the gunman the Isis propaganda agency Amaq claimed he was “a soldier of the Islamic State who carried out the attack in response to the calls to attack coalition countries.” What do we know about the gunman

According to witnesses the gunman said he wanted to “avenge Syria” and demanded the release of Salah Abdeslam, the surviving member of the jihadists who carried out the November 2015 Paris attacks and remains in French prison awaiting trial.

Police are believed to have quickly identified the gunman – a 26-year-old Franco-Moroccan national named Redouane Lakdim, before the assault was over.

Speaking after the police assault Interior Minister Gerard Collomb said the attacker, who lived in Carcassonne, was a “petty criminal” known for drug dealing “who suddenly decided to act”.

Collomb said he was not considered a terror threat.

He was known by the police for petty crimes, we had monitored him and did not think he had been radicalised,” Collomb said after arriving at the scene of the hostage-taking in the town of Trebes, near Carcassonne.

“He was already under surveillance when he suddenly decided to act,” he said. Collomb did not confirm the nationality of Lakdim.

France Info radio quoted sources who said he was active on social network sites frequented by extremists. He had also spent time in prison in 2016 and is suspected of having travelled to Syria at some point.

Did this affect the historic town of Carcassone?

After the discovery of the bodies of the victims of the car hijacking authorities took the step of evacuating the medieval fortress and asking tourists and visitors to remain in their hotels or restaurants.

Schools in Carcassonne also went into lock down with pupils kept inside.

@cnnBRK I live in carcassonne they blocked off roads to Trebes and the walled city was protected just in case, but not affected. I had lunch at restaurant in town, everything is ok pic.twitter.com/wxvA9y6gpJ

The security measures were later lifted.

How great is the terror threat in France?

The shootings come with France still on high alert after a string of jihadist attacks since 2015, including an attack on Charlie Hebdo and a Jewish supermarket as well as the attacks on bars an music venues in Paris.

In July 2016, in another attack claimed by Isis, a man drove a truck through revellers celebrating Bastille Day in the Riviera resort of Nice, killing 84 people.

If the link to Islamic State is confirmed, the attack would be the first major incident since the election of centrist President Emmanuel Macron in May last year.

A state of emergency put in place just after the Paris attacks was finally lifted in October last year, but soldiers continue to patrol major tourist sites and transport hubs under an anti-terror mission.

The last incident in France treated as a terror attack occurred in Marseille last October when two students were stabbed to death at the train station. The attacker shouted “Allahu Akbar” and he was later claimed by Isis as “one of their soldiers”.

French authorities regularly give updates on the number of thwarted attacks.

Authorities said they had foiled 20 attempted attacks last year and two more in 2018.

“Twenty attempts were foiled in France in 2017. We have to be vigilant everywhere,” Collomb told Le Progres newspaper in January.

“Today no part of the territory is free of risk,” he said.

Speaking after Friday's attack president Macron said the terror threat in France “remained high” due to the number of radicalized individuals.

However he said: “We are no longer like two or three years ago with operations conducted from the Iraqi-Syrian zone.”