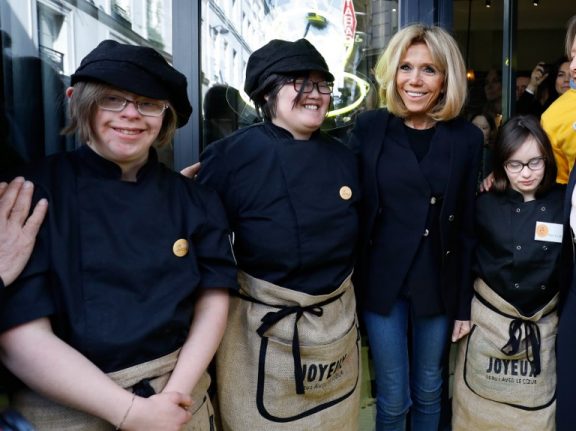 The coffee shop is the latest in a chain of lunch joints springing up across France staffed by people with Down syndrome, autism and other cognitive disabilities.

“Joyeux” means joyous and owner Yann Bucaille Lanzerac said he plans to spread the joy to at least four more outlets across France giving disabled people the chance to show what they can do and earn a living.

Foodie and commis chef Charles has been dreaming for years about cooking in a real restaurant.

“I'm really happy,” the 36-year-old with autism told AFP as he prepared gluten-free chickpea stew and osso bucco. “I've wanted to cook for a long
time, so my dream has come true. I was sick of just being a dishwasher.”

Waitress Mathilde, 20, who has Down syndrome, said the cafe has already helped her expand her skills as she helped with last-minute preparations for its grand opening on Wednesday, when French first lady Brigitte Macron dropped in for a quick bite. “I have already worked in a restaurant, preparing food. Here I am at the counter and I like it. I have learned how to become a barista and make coffee and to serve tables,” she added.

The cafe, in the Opera area popular with tourists, is full of playful touches with customers given a piece of Lego Duplo when they order at the counter. The food then comes out of the kitchen on a tray with a matching piece of the same colour.

France got its first restaurant run by staff with Down Syndrome in October 2016 when Le Reflet opened in the western city of Nantes. Owner Bucaille Lanrezac, a green energy entrepreneur, said he came up with the idea with his wife Lydwine when they took some young disabled people on acharity sailing trip on a catamaran off Brittany.

After Bucaille Lanrezac, 48, told him that he did not, Theo's disappointment pushed him to “think of a business that would allow us to employ disabled people”, he said.

The first Joyeux coffee shop opened in Rennes in December, and it already has one of the best scores on TripAdvisor in the western French city. Others offering vegan and gluten-free options are due to follow in Paris, Bordeaux, Lyon and possibly Lille, with all profits going to charity.

With disabled people twice as likely to be jobless, the mother of one of the Joyeux staff said her son has “become the Fabien that we love again, full of humour and enthusiasm” since he started work.

“It has become his passion,” she added.

“Personally, I get much more joy being with people who are different than in a world of the survival of the fittest where everyone's trying to win, to succeed, to be the best,” Bucaille Lanrezac told AFP.

“A person with Down syndrome is closer to what's essential. We sometimes run very fast (in life), but are we always running in the right direction?” he added.

French disabilities minister, Sophie Cluzel, also visited the cafe after its opening on World Down Syndrome Day, meeting the three managers who lead the team of 20 disabled staff. Work psychologist Laure Germain said staff do the jobs which best suit their talents and capabilities rather than their disability.

Working hours are adapted to how quickly each person gets tired. “Our objective is that everyone should be able to work autonomously at their work station,” she said.

Some staff have uniforms with Velcro straps rather than buttons, and one of the cooks has a specially adapted chopping board.

“With the coffee machine, for instance, some staff were not sure which way to turn the handle so we have used numbers and pictograms to make it clear,” the psychologist said.

“Some people with Down syndrome are well capable of reading, writing and using a wide vocabulary, while others cannot write and have difficulty expressing themselves,” said Germain, who said the trick was finding the job that best suited each individual.