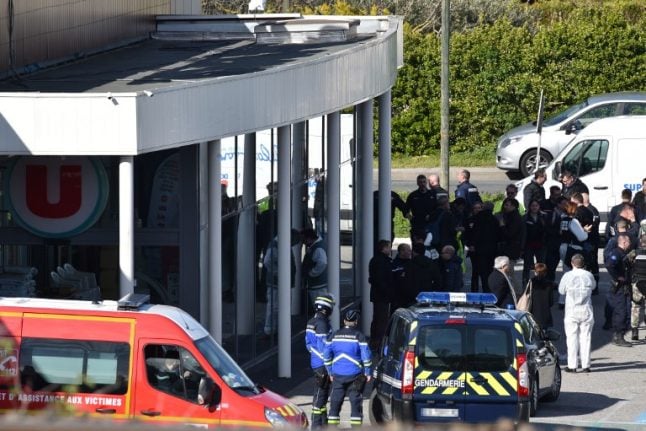 French security and police gather outside the Super U supermarket in the town of Trebes. Photo: AFP

French police killed a gunman who shot dead at least three people and injured two others in a hostage-taking and shooting spree in southwest France on Friday.

Security forces killed the gunman — believed to be a Moroccan who was on a watchlist of suspected Islamic extremists — after he carried out three separate attacks in the medieval town of Carcassonne and nearby Trebes. The Super U supermarket at Trebes where the shooting took place. Photo Screengrab Google street view

The attacker had began his rampage by hijacking a car in Carcassonne on Friday morning, in which he killed a passenger and injured the driver.

He then shot at a group of policeman, injuring one officer before driving to the supermarket, where he opened fire leaving two dead. He had pledged allegiance to terror group Isis, whose propaganda agency then claimed the attack saying gunman was a “soldier of Islamic State”. A witness reported that the assailant was armed with knives, a gun and grenades and shouted “Allahu Akbar” (God is greatest) before going into the
supermarket.

“I saw an open door for a refrigerated area and I told people to come to shelter there,” she said.

“We were 10 people and we got out by the emergency exit at the back.”

It then emerged the gunman still held one shopper hostage inside the store but agreed to release the shopper in exchange for a policeman. Before entering the supermarket the officer had called a colleague and left the call open so his specialist commando officers could hear what was happening inside the store.

Interior Minister Gerard Collomb said that just after 2.30pm specialist commando units launched a raid on the supermarket when they heard shots being fired. The gunman was killed in the assault but the officer who had been exchanged for the hostage was left seriously injured after being shot by the gunman.

President Macron said the lieutenant-colonel was fighting for life and praised his act of courage.

“He saved lives and honored his colleagues and his country,” said Macron.

Authorities took the step of evacuating the historic centre of Carcassonne, where pupils were locked in schools and tourists were confined to hotels and shops.

According to reports the gunman had spoken of wanting to “avenge Syria”. He had demanded for the release of Salah Abdeslam, the only surviving suspect of the 2015 Paris attacks, who is in jail in France.

He was identified as a 25-year-old French-Moroccan national from Carcassonne named Redouane Lakdim but Interior Minister Gerard Collomb said he was known to police as a drug dealer but not considered a terror threat.

“He was known by the police for petty crimes, we had monitored him and did not think he had been radicalised,” Collomb said after arriving at the scene of the hostage-taking in the town of Trebes, near Carcassonne.

“He was already under surveillance when he suddenly decided to act,” he said. According to numerous reports the gunman shouted “Allahu Akbar” as he opened fire. Specialist counter-terrorist prosecutors in Paris have opened an investigation meaning they are treating the incident as a terror attack.

Hundreds of police surrounded the building as helicopters hovered overhead.

“One witness named Karim, 55, told France info radio: “I heard shots fired around 11:10am. At that moment there were only a few gendarmes (military police) around but now there are between 200 to 300.

“The whole area is in lockdown and we are going to be moved away by the gendarmes.”

Another witness who worked at a nearby garage said: “There are gendarmes in front of the supermarket. We are locked in the garage with around 50 people. We are waiting.”

Local authorities tweeted that the area was out-of-bounds to the public.

According to reports the policeman who was shot in Carcassonne was part of a group of unarmed CRS police based in Marseille who were jogging at the time they were targeted by a gunman.

The policeman who was shot is in a stable condition and his life is not at risk, according to reports in the French press.

It is believed the gunman initially tried to run them over in a vehicle before opening fire.

“They threw themselves to the floor but one of them was hit in the shoulder,” a source told France Info radio.

A state of emergency put in place just after the Paris attacks was finally lifted in October last year, but soldiers continue to patrol major tourist sites and transport hubs under an anti-terror mission.

If the link to Islamic State is confirmed, the hostage-taking would be the first deadly attack in France since October, when two young women were stabbed to death outside Marseille's main train station.

The area of southwest France where Friday's shootings took place has been scarred by Islamic extremism before.

In 2012, Mohamed Merah shot dead seven people including three Jewish schoolchildren in nearby Toulouse and Montauban.