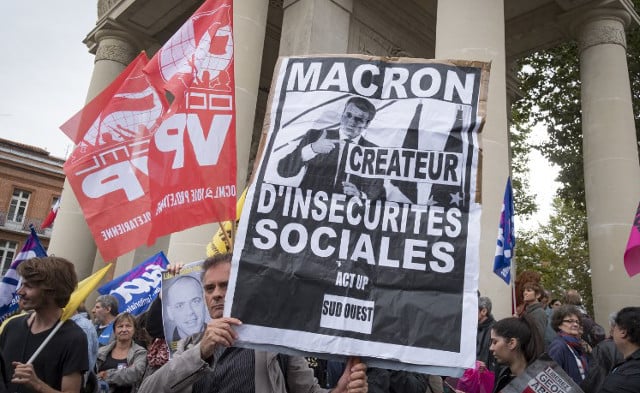 File photo: AFP
The walk-outs and demonstrations are the latest test of strength for the 40-year-old centrist leader as he pushes ahead with a new phase of his agenda to overhaul the state railways and other public services.
France's once fearsome unions have regularly forced governments into policy U-turns in the past, but Macron and his ministers have vowed not to yield to the pressure despite the prospect of months of disruption.
“There will be a lot of people taking part,” the leader of the hard-left CGT union, Philippe Martinez, promised on Wednesday. “If we do nothing, the government will not back down.”
The March 22 date was chosen deliberately to echo the start of nationwide protests in 1968 that led to the country's biggest-ever strike and notorious street battles between police and students in Paris in May of that year.
Some commentators have reached into the past to draw parallels with more recent confrontations, particularly to 1995 when weeks of strikes paralysed the country and forced the government to abandon a pension reform.
READ ALSO: Photo: AFP
For France's trade unions, it is a moment for them to show that they still wield power despite decades of declining membership numbers and new laws that have clipped their ability to shut down public services.
But the first round of their battle against Macron in September and October last year — over changes to labour law — ended in disappointment and saw the ex-investment banker prevail.
“We are going to continue reforming France in depth… with the certitude that our country needs this transformation to make up for the ground lost over previous decades,” Macron told reporters during a trip to India last week.
Surveys show public opinion largely behind his bid to end some of the historic rights of railway workers, including pension benefits and guarantees of a job for life.
Rolling strikes
The state railway operator SNCF has warned that only 40 percent of high-speed TGV services will be running on Thursday, and just one in four regular trains across the country.
It is the first day of a three-month wave of strikes announced by unions that will see their members walk off the job for two out of every five days between April and June in a new and experimental form of protest.
The disruption is expected to cause a major headache for management even on non-strike days because trains and staff will not be where they are supposed to be.
France's civil aviation authority meanwhile said a third of flights into and out of the main Paris airports of Charles de Gaulle, Orly and Beauvais would be cancelled on Thursday because of industrial action by air traffic controllers. Photo: AFP
An unknown number of schools are set to be affected, as are some hospitals, due to protests by teachers and health workers over planned changes to the education system and pay and conditions in medical facilities.
More than 140 protests have been planned across France in total, with the biggest of them set to take place at the Bastille monument in central Paris in the afternoon, where unions expect 25,000 demonstrators.
Low approval rating
For Macron, France's youngest-ever president, the biggest risk appears to be different groups who are angry at his fast-paced and multi-fronted reform efforts coming together as a united force against him.
As well as public sector workers, he has angered retirees by raising taxes on their pensions and is forcing through an unpopular reduction in the speed limit on major roads.
His political opponents on the left, including the Socialist party which lost power last year and the hard-left France Unbowed party, have said they plan to take part.
Macron's approval rating is at 37 percent, according to a survey by the Ipsos polling group published on Wednesday, with 55 percent holding a negative view of his presidency, the highest level since the start of his term last year.
According to the investigative newspaper Le Canard Enchaine, Macron told advisors on Monday he was feeling “serene” and said the day of strikes was “not a cause for panic”.