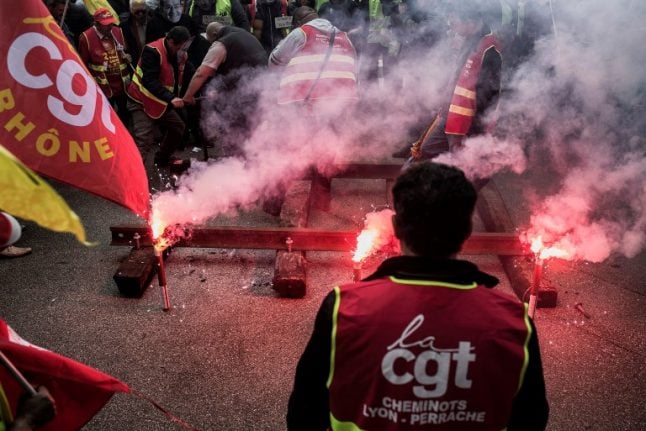 France will be hit by by severe travel disruption on Thursday due to a major strike by public service workers, air traffic controllers and rail staff. Scores of schools and creches are also set to close.

While many air and rail passengers along with Paris commuters curse another strike that has given them more travel misery and parents lament yet more childcare headaches, the various unions insist they are justified in causing so much disruption.

“These strikes are always difficult and we know that is not good for transport users and the public in general,” Yves Veyrier a spokesman for the union Force Ouvriere told The Local.

“We would prefer not to strike and would prefer to have a debate with the government, but we have asked Presidents Nicolas Sarkozy, François Hollande and now Emmanuel Macron and we are still waiting for it,” he said.

“People must understand, this is a last resort and this is about the future of France's public service for everyone.”

Public service workers in France have long been angry over pay – which is currently frozen – that has not kept up with inflation and are upset at changes to their sick pay. Unions accuse Macron of wanting to take a sledgehammer to the public sector.

Macron has pledged to cut 120,000 public jobs during his five-year term and his government has raised the prospect of voluntary redundancies, prompting fears that the quality of services will take a hit. Plans to use more contractors and increasingly offer pay based on merit, rather than on experience, are seen by unions as attacks on traditional job security.

“The only thing we have had from governments in recent years is cuts. They don't have any other solution other than cutting staff and we can't agree with that,” said Force Ouvriere's Veyrier.

“It's now very difficult for staff in hospitals to do their jobs and it's going to get worse in the years to come,” he said. “This is not just a strike about wages. The most important question for the public is 'do they consider the public service to be important?'”

French air traffic controllers, who so often in recent years have been the bane of holidaymakers' lives not to mention the CEO of Ryanair, Michael O'Leary, will once again down tools on Thursday much to the annoyance of passengers.

The three main airports in the Paris region – Charles-de-Gaulle, Orly and Beauvais – will see around 30 percent of flights cancelled.

But Norbert Bolis from the civil aviation arm of the CGT union says the disruption is justified and strikers have the long term interests of passengers in mind.

“The aim of our strike is obviously to create a power struggle with the government in order to obtain our demands,” Bolis told The Local. “We don't have any other means than to strike and protest. This is part of democracy.”

“Governments have reduced our staff numbers to such an extent that we can't do our jobs properly,” he said. “We know strikes are a problem for passengers but we can't have a public service without the resources and we can't improve the public service by cutting staff.

“If we don't have the staff we can't ensure their planes can take off. There will be difficulties and delays and the planes won't leave the ground.”

And in reference to Ryanair's Michael O'Leary, who has repeatedly called for a crackdown on French strikers and urged members of the public across Europe to sign the company's petition, the CGT's Bolis said: “These kinds of people always want everyone to work three times more and earn half as much.” French rail workers, known as cheminots have their own reason to cause travel chaos on Thursday, which is exactly what they are planning to do and for 36 other days until the end of June.

Macron's plans to strip new recruits of a guaranteed job for life and other benefits have riled unionists who also fear that a restructuring of the SNCF could eventually see it privatized.

While benefits such as early retirement, automatic pay rises, free and discounted train tickets for family members and special pension plans appear as though cheminots have the best deals in France, they insist they are being made scapegoats.

“For the last 15 years the image of rail workers in France has been degraded, and it's been getting even worse in recent months” SNCF worker Guy Wittman told France Info radio, decrying the “relentless and unjust” attacks against cheminots.

“I have never been privileged,” he said. “When I became a rail worker I knew I would have to sacrifice my weekends, nights, family parties, but that I would have advantages in return, like free travel and the right to retire at 55,” he added.

While top execs are well paid some 60 percent of rail workers earn under €3,000 a month or around the average wage.

The problem rail workers have is that most of the French public (72 percent) approve of the government ending their special employment status for new recruits and a majority also disapprove of their strike. The public appear sympathetic with government's concern that the rail operator is saddled with 46.6 billion euros ($57.3 billion) of debt and SNCF runs trains at a 30 percent higher cost than European neighbours.

But unions are angry with the government's apparent refusal to negotiate.

Laurent Brun, head of the CGT Cheminots rail union, said the government would “bear responsibility for a very long and intense battle” in forcing
through changes to the rail network.

That battle starts on Thursday and things could get worse in the weeks to come.

A leaked letter from an official at the hardline CGT union, the biggest at the SNCF, suggests that workers are gearing up to cause maximum disruptions while minimising the impact from lost wages.

“The disarray to operations will also affect the days when we're working,” according to the letter, obtained by AFP on Thursday.”Management will be totally lost and unable to anticipate anything.”

Whatever public sympathy there is for strikers and their cause will be tested in the weeks to come an will likely determine which side wins.

“If we don't do anything, the government won't back down,” CGT chief Philippe Martinez said.