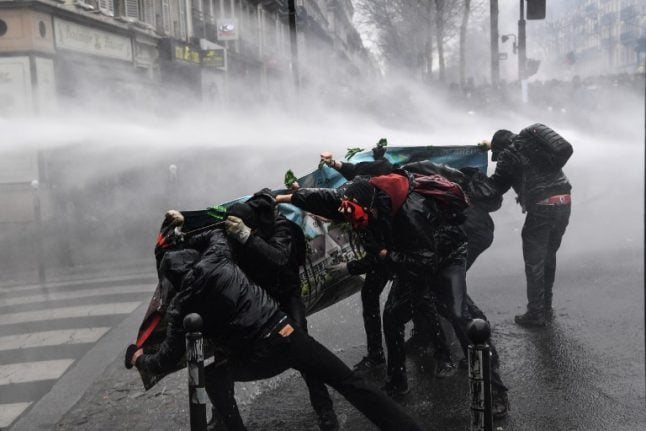 Protesters take cover behind their banner from a police water cannon in Paris. Photo: AFP

A wave of industrial action hit France on Thursday with rail and public service strikes causing headaches for commuters and passengers.

And the action wasn't limited to the French capital, with street protests planned in 140 different towns and cities across the country.

Perhaps unsurprisingly ugly scenes broke out during some of the protests and many strikers had brought placards displaying harsh words for French President Emmanuel Macron.

Here's our selection of images and slogans that illustrate the events of the day. Violence flared in Paris and Nantes in Western France.

The image below shows police using water canons against demonstrators in Paris. The inside of a car burns on the sidelines of the demonstration in Paris. The image below shows riot police in Nantes shielding themselves from smoke bombs. Many demonstrators saw the protests as a chance to get their message across to Macron in their own words.

The message below read “Macron the SNCF belongs to the French people.” A woman holds a placard, reading “If you think that education costs too much, try ignorance”. Photo: AFP A woman holds a placard reading in French “I ran faster in 68 but I shout louder now” referring to the famous protests that took place France in May 1968. Photo: AFP Demonstrators hold a banner saying, 'Hello Jupitir? This is Earth' referring to Macron's comparison of his job to that of the Roman king of the gods Jupiter earlier in his presidency.  Photo: AFP A man holds a sign in Nantes calling the government a “bunch of crooks”. Photo: AFP A young man with the word “work” written across his chest holds a sign saying “Macron killed me” in Paris. Photo: AFP Meanwhile the tweet below shows a workers holding a sign saying, “No, to the liquidation of public services.”

Other demonstrators held a sign saying, “No need to count, we're all here”. There has been much speculation in France over how many people would take to the streets tp support the protests.