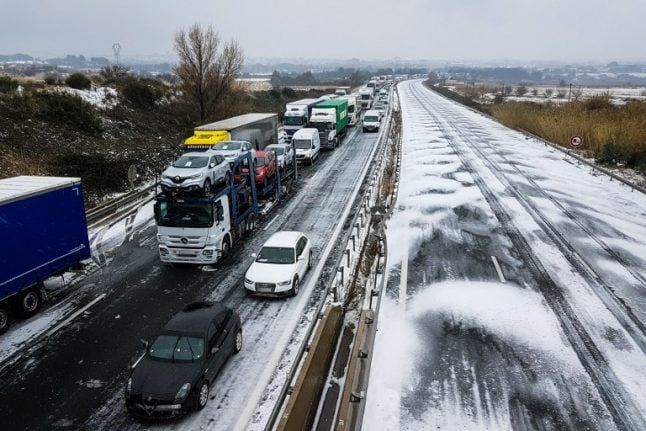 The departments that can expect snow showers are Ariege, Aude, Tarn, Pyrénées-Orientales and Haute-Garonne, Haute-Pyrénées all in the region of Occitanie.

On top of those, the Pyrénées-Atlantiques in the south west and Charente-Maritime and Deux-Sevres in the west are also on alert for snow showers.

The alerts will remain in place until Tuesday morning.

Members of the public have been asked to take extreme precaution especially when travelling by car, which should be avoided if possible. The country's weather agency Météo France lifted weather warnings that had been in place in the north of the country.

Earlier on Monday it was the Paris region and parts of Normandy that had been on alert for snow and ice.

The reason for the alerts was due to overnight snow, between 1cm and 3cm on average, although local areas saw up to 5cm.

Although there was only light snow and nothing compared to last month's snowy period the fact temperatures remained slightly below zero on Monday morning meant the snow and ice caused problems for certain travellers.

In certain areas lorries were barred from the main roads, including on the RN 118 road in Île-de-Fance until Monday afternoon.

France's traffic monitor Bison Futé warned that driving might be difficult on the motorways, A13, A28, A1 and the N154 in the Île-de-France region.

Paris transport authority RATP said that the Metro and RER train services were running as normal although certain bus routes had been affected by the snow.

Temperatures are to remain chilly for much of the week although France should warm up gradually as the week progresses, weather agency Météo France forecasts.