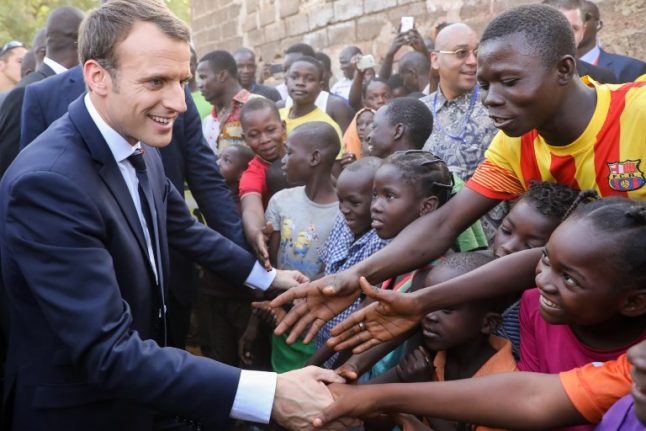 French President Emmanuel Macron shakes hands with children during a trip to Burkina Faso in 2017. Photo: AFP
He's France's most anglophone president ever, who reaches for the language of the old foe when telling global audiences that “France is back”, or that he wants ecologically to “make our planet great again.”
Emmanuel Macron's mastery of English has wowed foreign leaders, who are used to their French counterparts either refusing to speak a language they see as a symbol of cultural imperialism or doing so with an accent so thick it makes Inspector Clouseau sound like Prince Philip.
Yet despite English being his go-to language when abroad France's energetic president is on a drive to boost the use of his native tongue.
On Tuesday, “International Francophonie Day”, he will set out his plan for promoting global use of French, which he sees as key to boosting France's place on the world stage.
On a visit to Burkina Faso in November he made an impassioned appeal to francophone Africans not to turn their backs on the language of the former colonial power by switching to English.
“To refuse the French language in order to make English fashionable on the African continent is to be blind to the future,” he declared.
“If we go about it right, France will be the first language in Africa and maybe even the world in the coming decades!”, he boldly predicted.
READ ALSO: Photo: Depositphotos
That's a tall order for a language that was only the world's sixth-most spoken language in 2014, after Chinese, English, Spanish and Arabic or Hindi, according to official French figures.
To make up the difference France is looking to Africa for a shot in the arm.
Macron based his prediction on a study from The International Francophonie Organization which forecast that, due to explosive population growth in Africa, over one billion people will live in French-speaking countries by 2065, second only to countries that speak English.
Critics have described the statistics as misleading, noting that not all inhabitants of countries that have French as an official language speak what was once the language of diplomacy.
The African language?
Macron is treading carefully, aware that any attempt to foist more French on former African colonies where Paris has a history of propping up authoritarian regimes could backfire.
In Burkina Faso, the 40-year-old philosophy graduate said he was “from a generation that doesn't come to tell Africans what to do”, and argued that “the French language is no longer solely French but also, maybe even more so, African.”
One of the main components of his “plan for French and multilingualism in the world” is investment in education in developing countries, particularly in Africa.
On a visit to Senegal in February, he pledged 200 million euros ($248 million) towards the Global Partnership for Education.
But among African intellectuals, the linguistic ambitions of France's president nicknamed Jupiter, god of gods, for his lofty style, have met with scepticism. Macron in Burkina Faso. Photo: AFP
Franco-Congolese author Alain Mabanckou, a professor at the University of California-Los Angeles, turned down an invitation by Macron to help draft the plan, saying France first needed to “prove” it had renounced colonialism.
Mabanckou sees France's efforts to promote the French language abroad as a cover for continued meddling in former colonies.
Slamming its “top-down” Paris-centric approach to the French language he called for a “horizontal French-speaking world, of the people, by the people, for the people.”
His sentiments were echoed by Cameroonian philosopher Achille Mbembe and Franco-Djiboutian author and scholar Abdourahman Waberi.
Mbembe said that while citizens in former colonies embraced French, they were opposed to what they perceived as France's paternalistic leadership of the French-speaking world.
“If he (Macron) really wanted to get away from the colonial past, he would have consulted more, listened more and engaged in more dialogue” with Africans, Waberi argued.
Preacher not practising
Macron has attempted to argue that French cohabits better with indigenous African languages such as Senegal's Wolof, than English which he accuses of sweeping aside local languages.
But some critics accuse him of being a poor ambassador for his own tongue.
French language purists in Quebec have been aghast at his use of English in multiple interviews and speeches as well as in the titles of two international gatherings held in Paris — the “One Planet Summit” in December and the “Choose France” investment summit in January.