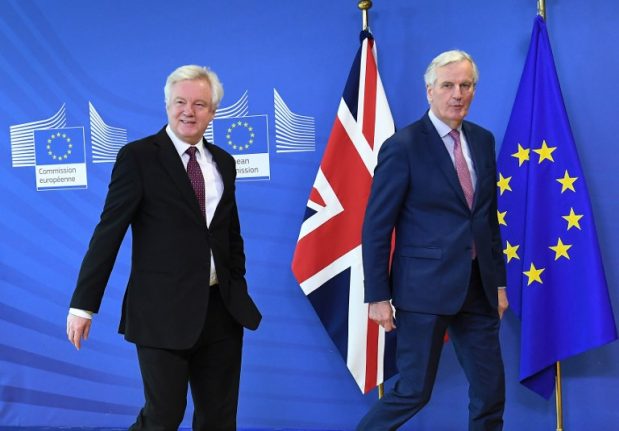 Britain is scheduled to formally leave the European Union on March 29th, 2019 – the day known as official “Brexit Day” – however an 21-month transition period will follow to help the “orderly withdrawal” of the UK.

On Monday the EU's chief negotiator and the British government's David Davis announced they had settled on “a large part” of the transition period agreement, which they described as a “decisive step”. However nothing is set in stone nor has anything been signed off because outstanding issues are complicating matters.

On the subject of citizens rights the two sides have agreed that those EU citizens arriving in the UK and those Britons who head to France and elsewhere in the EU before the end of the transition period will benefit from the same rights and guarantees as those who arrived before Brexit.

“We agreed that British citizens and European citizens of the 27 who arrive during that transition period will receive the same rights and guarantees as those who arrived before the day of Brexit,” said Barnier.

In other words anyone who is desperate to move to France can now take a little more time safe in the knowledge that if they 'get in the door' before the end of 2020 they will have the same rights as those already here.

Despite Monday's much-heralded announcement Britons living in Europe said they had no more certainty about their post-Brexit futures and blasted the fact that “English cheddar cheese would have more free movement rights.”

Jane Golding, Chair of British in Europe said: “Contrary to what David Davis and Michel Barnier are saying, this document provides no more certainty for the 1.2 million British people living in the EU 27, EEA and Switzerland than they had this morning.

“Not only does the text look as though it has been rushed out under pressure but in his statement, Mr Barnier once again said that nothing is agreed until everything is agreed, meaning there will not be legal certainty for the 4.6 million people most directly affected by Brexit until the agreement is finally signed off,” said Golding.

One of the major complaints from campaign groups such as British in Europe is that those 4.6 million people most affected by Brexit, including some 150,000 Brits living in France, have still been given no guarantees over their continued right to freedom of movement throughout the EU after Brexit.

Without continued freedom of movement many Britons feel they will effectively be landlocked in their country of residence.

“In fact, the agreement is as clear as mud when it comes to our future rights to move and work across the EU, either as people falling under the Withdrawal Agreement or as third country nationals,” said Golding.

“As things stand, after Brexit English cheddar will have more free movement rights than we will”, said Golding. she said.

“It seems that Article 32 – which covered restrictions to our future cross border working rights and free movement – has now vanished. And yet, it is still referred to in other parts of the text,” said Golding. “So, while we are pleased that this restrictive provision has been removed, we are confused and nervous about what might replace it.”

“Any withdrawal agreement will not provide certainty or security for UK nationals living in Europe until we know for sure that it includes guarantees on free movement and cross border working,” she added.

Some members of 6,700-strong campaign group Remain in France Together were also less than enthused by Monday's announcement. Many are concerned by Barnier's comment that “nothing is agreed until it's agreed” which, given the fact that citizen's rights are not ring fenced, means it could all fall apart at any moment if for example the two sides fall to agree a solution to the Northern Ireland border issue.

“I have read again and there is clearly more left unsaid than one might expect,” said one member on the group's Facebook page.” It looks very frail and anything but resolved to me.”

Another member added: “The detailed look doesn’t make anything much clearer for us. All our current rights still not agreed or ring-fenced. Even this Withdrawal Agreement hasn’t been signed yet, despite what the media are saying.”

“Clear as mud,” “vague”, “nothing concrete” were words used by others.

The EU and in particular the British government still have a long way to go before Brits living in France and around Europe will be satisfied by any Brexit deal.