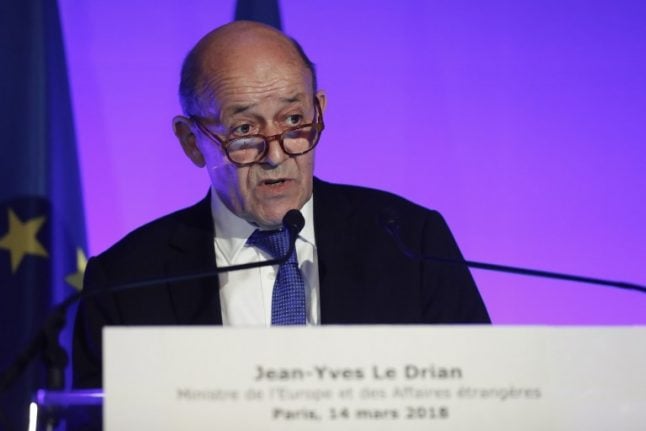 French Foreign Affairs Minister Jean-Yves Le Drian. PHOTO: THOMAS SAMSON / AFP
“Challenging borders by force is contrary to international law, including commitments made by the Russian Federation,” the French foreign ministry said in a statement.
“France does not recognize the organization of Russia's presidential election in Crimea today,” it added as Russians vote in an election overshadowed by a furious row with Britain and its allies over the poisoning of a former Russian double agent in England.
Sunday marks exactly four years since President Vladimir Putin, who is seen as a virtual certainty for a fourth term, signed a treaty declaring Crimea part of Russia after taking control of the former Soviet territory following the ouster of a Russian-backed president in Ukraine's capital Kiev.
It is Russia's first presidential election since the annexation, which prompted pro-Russian rebels in eastern Ukraine to take up arms against the state, sparking a conflict that has claimed more than 10,000 lives.
“Four years after the illegal annexation of the Autonomous Republic of Crimea and (the city of) Sevastopol, France remains firmly attached to the full restoration of Ukraine's sovereignty and territorial integrity within internationally recognized borders,” the French statement said.
France, it said, was “concerned by the militarization of the peninsula and the deterioration of the human rights situation, particularly with regard to Crimean Tatars,” a Muslim ethnic minority that mostly opposed the annexation.
The statement added that French Foreign Minister Jean-Yves Le Drian would travel to Ukraine next week to discuss the situation in Crimea and eastern Ukraine with the former Soviet republic's pro-Western government.