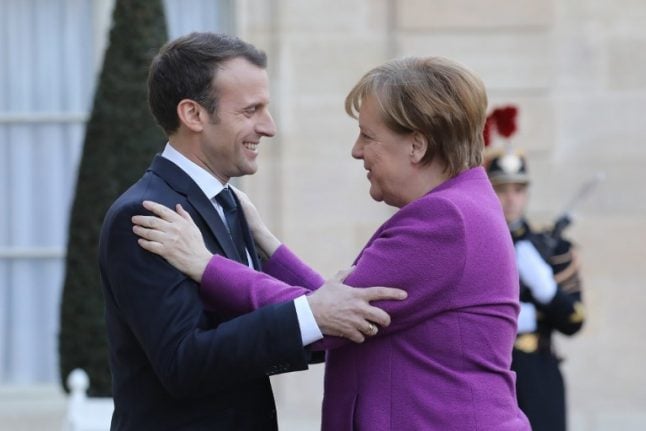 French President Emmanuel Macron greets German Chancellor Angela Merkel upon her arrival at the Elysee presidential Palace in Paris on Friday. PHOTO: LUDOVIC MARIN / AFP
Macron has called for a major drive to reinvigorate the EU and deepen cooperation at a time of rising populism, with proposals that include a common eurozone finance minister and budget.
Merkel has given a cautious welcome to his ideas, but had been hamstrung by nearly six months of tortuous talks to form a coalition government, the longest in Germany's post-war history.
Heading into talks Friday at the Elysee Palace with the newly-reinstated chancellor, Macron sought to accelerate the pace. Citing Brexit and the gains made by populists in Italian elections as cause for urgent action, he said France and Germany would “propose a clear, ambitious roadmap” on the eurozone, migration policy, defence, trade, research and education by June.
Merkel, who has been weakened by her conservative CDU/CSU party's election losses, backed the deadline, telling a joint press conference: “We have to achieve results by June.”
While France and Germany did “not always have the same opinions at first”, she said they would attempt to find “common paths”.
But even if he manages to win Merkel over, Macron's plans could founder on resistance from smaller northern European countries wary of being railroaded into sweeping reforms.
Northern Europe sceptics
Merkel's visit to Paris drew a sharp response from Dutch Prime Minister Mark Rutte, who told Berlin and Paris not to ignore the concerns of other EU states.
“Of course the German government can meet the French government without us being there,” Rutte told Germany's Spiegel magazine. “But that doesn't mean that we and other EU countries agree with everything the Germans and French agree on. We won't just nod along to everything.”
Finance ministers from countries including Denmark, Ireland, Sweden and the Netherlands had already called last week for more modest goals, such as completing the eurozone banking union, instead of “far-reaching proposals” for change.
For Macron, however, who made overhauling European institutions a key campaign promise last year, Merkel's return to the helm of EU heavyweight Germany comes not a moment too soon. Congratulating Merkel on her new Conservative-Social Democrat coalition, he said: “I have to tell you that the joy was all ours when it ended well.”
While Merkel was tied up in negotiations, he said, France — seen for years as a weak link in western Europe — had been knuckling down on its own reforms.
“For years Germany waited for France to carry out reforms: France has done so in the past few months, with determination, and will continue to do so,” he said, referring to changes to the labour code, taxation and spending aimed at currying credibility with EU partners.
'Good signal for Europe'
Macron's proposals for a post-Brexit overhaul include a eurozone budget to help cushion economic shocks and a European “rapid reaction force” to work with national armies.
“We are ready to reach some agreements” on EU reforms, French Finance Minister Bruno Le Maire said on Friday after meeting his new German counterpart Olaf Scholz to prepare for a eurozone summit next week.
“We're here and we are going to get to work to meet the challenges we face,” Scholz said, calling Macron's proposals “a very good signal for Europe”.
But finding common ground between France and Germany — let alone the other EU members — is likely to prove elusive on several key issues. Merkel had already reiterated this week that Berlin remains opposed to any mutualisation of debt in Europe, in which the debt loads of individual countries would be spread across the bloc. And on Friday, she said that although Germany is willing to pay more into the EU budget to fill the gap once Britain leaves the bloc, it wouldn't be giving a blank check.
“We said in our coalition agreement that we would be prepared to pay a bit more into the budget,” she said after meeting Sweden's Prime Minister Stefan Löfven. “Of course that doesn't mean that any and all wishes will be fulfilled.”
Among the issues where France and Germany could reach a shared position is on the response to the brazen assassination attempt on a Russian former double agent in Britain, for which London, Paris, Berlin and Washington have all pointed a finger at Moscow.
“We condemn this Russian interference as everything leads us to believe that it was indeed Russia” that was behind the nerve agent attack, Macron repeated.
By AFP's Clare Byrne and Katy Lee