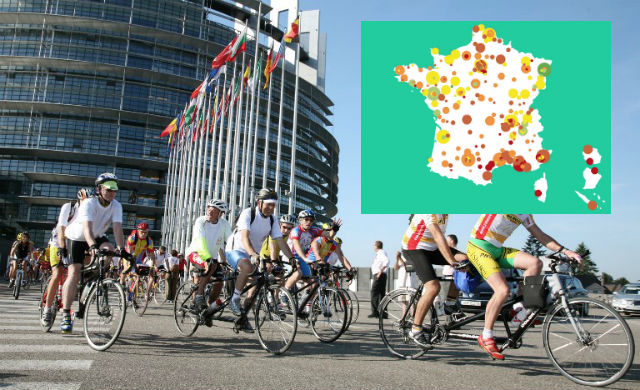 The survey was carried out by France's Federation of Bicycle users based on the opinions of over 113,000 cyclists across the country.

And out of France's biggest cities, so those with a population of over 200,000 the undisputed winner was the eastern city of Strasbourg.

The city scored highly for the efforts made by the local authority to improve cycling as well as the presence of two lane cycle paths, ease of getting around on a bike and the ease of being able to hire a bike and find a repair shop if needed.

Nantes, recently judged the best city in the country to work in, took silver medal position and in bronze came Bordeaux in the south west.

In the second category of cities with a population of between 100,000 and 200,000 it was Grenoble in the south east that topped the rankings, followed by Dijon in the east and then Angers in the west.

Then in the category of towns with a population of between 50,000 and 100,000 it was the picturesque La Rochelle on the Atlantic coast that came in first, followed by Chambery in the Alps and then Versailles, just outside Paris. (Water is sprayed on participants from above as they ride bicycles during the Bike Parade during Velo-city in Nantes on June 3, 2015.AFP)

As for the list of cities and towns that were ranked the worst for cyclists it appears you should stay away from the Côte d'Azur if you like bike riding.

Marseille, Nice and Toulon were among the cities and towns with the worst score as well as certain suburbs of Paris including Neuilly-sur-Seine, Villejuif and Aubervilliers.

Each city was given a score from A to G and while no town in France achieved an A grade, some 11 percent of the 316 places scored were given a G grade.

Most of he criteria the survey was based on revolved around how easy it was to get around by bike. Respondents were asked to score the cities cycle path network as well as how well the paths were maintained.

Other categories included the quality and places available to lock bikes and the effort made to reduce motorised traffic.

But while authorities in Strasbourg, Grenoble and La Rochelle can feel proud of themselves, the survey made sorry reading for the state of cycling in France in general.

Only 21 out of 316 towns and cities that were scored achieved an above average score. The authors of report were scathing about how bad most French cities are for cycling.

“The conclusion is clear: today, the French cities do not allow you to ride a bike in a simple, comfortable and secure way. The consequence is that children and the elderly are excluded from cycling, which is essential for their independence and health,” said the FUB.

“The French want to cycle but towns need to put in place the right infrastructure whether it's proper two way cycle lanes or places to lock up bikes,” the FUB's president Olivier Schneider told The Local.

“Authorities need to take cycling seriously and see it as a proper form of transport. The aim of our survey was not to just say cycling in France in general is not good, we wanted to show which cities were doing well and which were not.

However the organisation added that Strasbourg and La Rochelle, which scored highly are examples of what can be achieved if town authorities introduce pro-cycling policies.

The FUB demanded the creation of a €200 million fund to help towns invest in cycle paths and networks.

One other recommendation made was to improve the security in train stations to encourage commuters and passengers to use their bikes to get their, safe in the knowledge their bikes will still be there when they return.

France only has 30,000 official areas in train stations to lock bikes, compared to 440,000 in the Netherlands.

Can I commute with my bike?

The French government is keen to encourage ‘multimode’ commuting – or people who cycle part of the way to work and take the train or bus for the rest.

On June 10th 2021, it published a decree which makes it mandatory for SNCF train stations and Paris’ RATP stations which have high numbers of passengers to provide secured parking spaces for bikes by 2024. This obligation concerns 1,133 train stations, which represent 37 percent of all train stations in France.

How can I carry my bike on the train?

When it comes to taking a bike on longer train journeys, the rules vary depending on the type of train you are using.

You can bring your bike, without having to disassemble it, on every TER (regional train) for free and without having to make a reservation, but keep in mind that space is limited. Since March 2021, every new trains or trains that are being renovated must have at least 8 spaces for bikes on board.

Some TGVs (high-speed trains) and most Intercités (non high-speed national trains) offer a possibility to take your bike aboard, and in those where you can, you must make a reservation online or at the train station when you buy your ticket.

THIS MAP allows you to check all the main long distance train lines that allow bikes on board.

When to take the train with your bike?

In TERs, spaces for bikes are available on a first-come, first-served basis and cannot be booked, therefore it’s better not to travel during rush hours.

You’ll find special information about when and how to travel with your bike on TGVs and Intercités on the SNCF website.

How to reserve a spot for your bike?

For TERs, making a reservation is not possible.

For TGVs and Intercités, if you want to travel with an assembled bike, you must make a reservation for a dedicated spot when you buy your ticket on the website Oui.sncf . The price to add a bike on a TGV starts from 10€ and from 5€ on an Intercités. Adding a bike after you bought your ticket is not possible.

Also, it’s important to note that you won’t be able to reserve a space for your bike when you  make a reservation from your phone on the app Oui.sncf. You can add a bike from your phone with the app Trainline.

How to carry a disassembled bike?

You can carry your bike in every SNCF trains as long as it is disassembled in a bag which dimensions doesn’t exceed 90x120cm. In this case, it is considered hand luggage.

Only regular bikes are accepted on trains. Carrying recumbent bikes, tricycles, tandems or trailers is not allowed. Only one train makes an exception during summer: the train Loire à Vélo, a train that goes from Nevers in the Center of France to the Atlantic Coast.

On the line Bretagne / TER : From June 7th to September 30th 2021, making a reservation for your bike to travel on a TER in the Bretagne région is mandatory. You will have to pay 3€ per bike and you can only reserve a ticket that includes a bike on the website.

Travelling with the Train Loire à Vélo : This train that goes from the city of Orléans to Le Croisic on the Atlantic Coast is back on track. The ride is free and you don’t have to make a reservation for your bike.

The Nouvelle-Aquitaine / La Vélodyssée service : In the Nouvelle Aquitaine region which includes Bordeaux and Biarritz, a special TER service with bikes allowed will be working from mid-July to August 2021. It will be free and without reservation, you can find some info on this map.

On the line ViaRhôna / TER Lyon – Avignon : From July 3rd to September 19th, it will be possible to travel between the cities of Lyon and Avignon by train with your bike but only during week-ends and bank holidays. You must make a reservation and the price per bike will be of 3€.

La Véloscénie :  is a special itinerary for people who want to cycle between Paris and the Mont Saint-Michel and visit different places along the journey. From May to September the line from Paris to Pontorson Mont Saint-Michel embarks your bikes for free.

CYCLING
VIDEO: Why you may struggle to buy a bike in Europe in 2021
Url copied to clipboard!