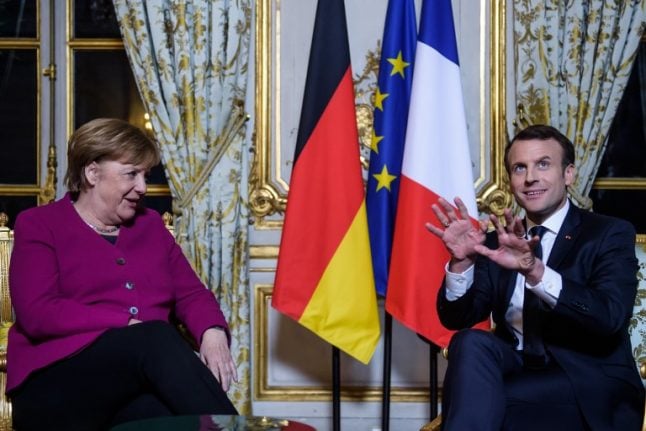 Photo: AFP
Macron has called for a major reform drive to reinvigorate the European Union at a time of rising populist challenges. His proposals include a common eurozone finance minister and budget.
But he knows his plans won't get far without the support of Europe's biggest economy, which has been without a new government during nearly six months of tortuous coalition talks following September elections.
“It's certainly a day Macron has long been waiting for,” said Sebastien Maillard of the Jacques Delors Institute.
“There's a shared sense of urgency” on the part of both leaders ahead of European Parliament elections next year, which could give eurosceptic parties a greater foothold, Maillard said.
The surprisingly strong showings by far-right and anti-establishment parties in Italy's elections this month have only reinforced fears that traditional parties are failing to meet voters' demands.
“We've been buffeted, but audacity is our response” for getting deeper EU integration back on track, Macron said in September in laying out his reform plans for the bloc.
His other ideas for a post-Brexit shake-up are to create a parliament for the 19-member eurozone and a European “rapid reaction force” to work with national armies. Photo: AFP
Macron's been waiting
Merkel's decision to make a quick visit to Paris signals that both leaders are anxious to get the “Franco-German motor” back up and running, analysts say.
“Merkel is fully aware that Macron has been waiting for a response on his reform projects for the EU, and more specifically the eurozone,” said Sabine von Oppeln, a political scientist at the Free University of Berlin.
“Going immediately to France is a sign that she takes his proposals very seriously,” she said.
But finding common ground is likely to prove elusive on several key issues, even though the two want to project a sense that EU reform is moving forward.
Among the issues where France and Germany can reach a shared position, Maillard cited a new push to confront the migrant crisis that has rocked the continent, and more effective taxation of digital economy giants.
“The two countries are well aware that this theme will be at the centre of the coming European elections,” he said.
“It's an area where they can come together and show that the situation is under control.” Photo: AFP
Money matters
The two leaders are also likely to voice a spirited defence of the rule of law, a response to the populist governments in Poland, Hungary and others in eastern Europe which have repeatedly clashed with Brussels.
The diplomatic tensions with Russia in the wake of an ex-spy's poisoning with a rare nerve agent in Britain give added impetus for strengthening European unity and defence.
Analysts say Merkel will have to win over many in Germany on deeper military cooperation, such as the future European combat jet.
Even trickier will be a meeting of minds on reforming the eurozone, not least Macron's call for a European Monetary Fund that could help member states when they run into trouble.
“The big question is how much money should be invested in the eurozone… Not to mention the question of a eurozone finance minister, which isn't likely to go down well in Germany,” Von Oppeln said.
And Merkel reiterated this week that Berlin remains opposed to any mutualisation of debt in Europe, in which the debt loads of individual countries would be spread across the bloc.