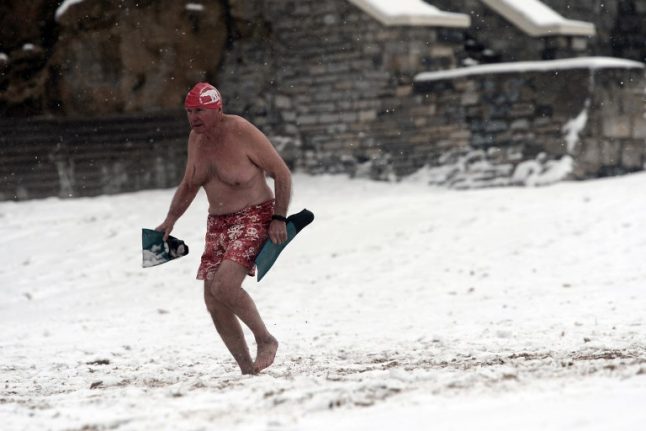 Just as the country began eagerly anticipating the full arrival of spring sunshine, France's national weather agency Meteo France has announced yet another cold snap is set to hit at the weekend.

After a few days of rain and temperatures of between 10C and 17C around the country, the mercury will drop by around 10C on Saturday through to Monday, the weather agency said.
That means that after a short taste of spring, the cold snap will see temperatures plummet to between -4C and 2C due to another cold blast from Siberia.
In Paris temperatures look set to drop to 1C on Saturday with a chance of snow, while in Brittany temperatures will be at around 4C.
There is also the prospect of snow in Normandy.
The map below from La Chaine Météo shows the parts of France that could see snow at the weekend. Weather predictions for Sunday 7am-1pm. Map: Meteo France
Frost is predicted to hit most of the north of the country and there could be widespread snowfalls too.
However it's unlikely we'll see the snowy scenes of the end of February as the ground is likely to be too warm for it to settle. Weather predictions for Monday 1am-7am. Map: Meteo France
Authorities have said it is possible that 1-2cm will hit parts of the north of France including the Aisne department, as well as the Oise and Somme departments on Monday.

The cold snap could continue until Tuesday, Meteo France said.