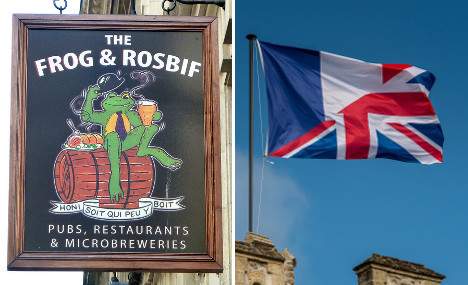 Photo: AFP
“You know, you are so lucky”. I can’t even remember how many times this has been said to me over the years.
Every French friend I've had, every English teacher at school, all my parents’ friends and colleagues would at some point mention how great it must be to be growing up as an English girl in France.
Now, don’t get me wrong. I realise that it is. Not only do I get to eat all the cheese I want, taste the world famous wines and bask in the beautiful sunlight of rural Burgundy but I have also acquired a very open mind, a curiosity to discover other cultures and a deep love for the two I grew up with.
For instance, I really appreciate a good long lunch, the ones that take you all the way to 4pm, those relaxed afternoons in the French countryside and that ‘laissez-faire’ mentality which are all things France has given me.
And on the other hand, I also enjoy a good cup of tea, not the hot water-and-nothing kind that you can get served in France but a real cuppa. I can quote nearly any line from Monty Python (I am very glad to have converted a few of my French friends to it) and, if I had to be really honest, I do feel proud when someone yells “Eh, le rosbif!”
READ ALSO: And of course, the best part is knowing two languages.
Even though I remember having problems, I have never had to make a real effort to learn either of them. For this reason I will be eternally grateful to my parents for having made the decision to move to France.
But to get to this point it wasn’t all Burgundian sunshine and roses. Growing up I was at a loss to know where I actually belonged and for a long time “lucky” wasn’t a word I would have used to describe my situation.
Having moved to France at the age of one, I had to learn French while I was learning English. This confused me terribly and I missed out on a lot at school. I remember trying to communicate with a teacher in English and her ignoring me saying, “If it’s not French, I am not listening”.
To this day I use this to explain the fact that I am so bad at maths: I didn’t ever get the basics!
And although this is a lie, I think I am owed this excuse for all the hardships I endured in my school years. During that time, I had to learn to dodge anyone running up to me at lunch break with a page of French words they needed translating…and got pretty good at it.
I got so bothered with people asking me to say something in English that in the end I invented stupid phrases to confuse them. My favourite was “These elephants are wearing socks, look out, I am made of cardboard.” (they loved that one). (Anya Walsh)
Out of school, I would dread the now familiar question from the adults: “So, what do you feel you are? More French or English?”
Imagine the existential crisis a 10-year-old faces with that one. I remember racking my brains and finally answering with a banal, “I don’t know, both perhaps”. But I always felt a bit disappointed with myself for not knowing.
These are a few of the issues that face any child growing up in two distinct cultures. But then there’s growing up French and British.
The French call it “la bonne guerre” which means “the good war”. It has always existed between France and “Les British”, as they put it.
I understand it, it’s all good fun and deep down I know these two countries can’t be without one another. But it was tough growing up having to defend myself from relentless jokes and even tougher having to assert my personality beyond which cultural stereotype I fitted into.
Now that I am an adult, the conversations have changed but the theme is still the same. People have taken to commenting on my dress sense: “You look so British, ma chérie, look at that”.
Even though it is probably meant as a compliment I can’t help getting frustrated at the continual branding of what I do…and anyway I thought I was looking pretty French that day. Photo: AFP
In the UK, I might be with some friends at a restaurant: “When you sit like this, you are just so French” or even more to the point: “Don’t be all French like that”.
All my personality traits seem to be categorised as either French or British. And when anything you do is attributed to one culture or the other, it gets very easy to second guess yourself. It has been a constant battle for me to forget about my heritage and live my life in the way that is most comfortable.
For years, I thought of myself as a perpetual foreigner. Foreign among my friends in France and foreign when I came back to the UK, always searching for a place where I could say I definitely belonged but ending up as confused as ever.
It wasn’t all easy but looking back, I think all the people telling me I was lucky were right.
Growing up like this has deeply influenced the way I think and perceive myself, not as a walking stereotype anymore, but as a true French Brit, as cosmopolitan as the drink and I wouldn’t have it any other way.
by Anya Walsh
Url copied to clipboard!