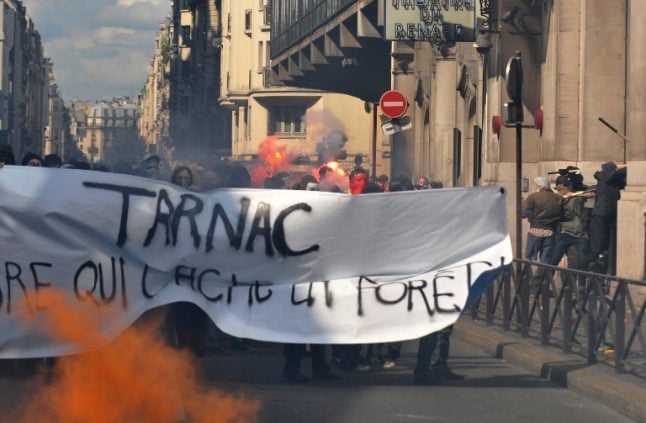 People demonstrating in support of the "Tarnac group". Photo: AFP
The “Tarnac group”, named after the village near their communal living compound in central France, has staunchly denied the charges during more than seven years of investigations.
They were rounded up in a televised police raid on November 11, 2008, a few days after steel rods were placed on overhead power cables on three TGV lines, stranding some 20,000 passengers as more than 100 trains were cancelled.
But defence lawyers claimed “anomalies” in the inquiry, most notably testimony from a supposed witness who later said he had simply signed a document prepared by the police.
Critics also accused the government under then president Nicolas Sarkozy of whipping up fears of a return of “ultra-leftist terrorism,” even though a judge eventually refused to try the Tarnac suspects on terror charges.
Instead, the group's leader Julien Coupat, his ex-wife Yildune Levy and two others are facing conspiracy charges, while two others are being charged with falsifying or receiving stolen documents.
Another two people are being tried for refusing to submit samples for DNA testing.
“The 'Tarnac affair' is a case of politicians manipulating the legal system,” said Levy's lawyer Marie Dose. Paris demonstration in support of the “Tarnac group. Photo: AFP
'Scandalous'
The case centred on the charismatic figure of Coupat, now 43, a far-left intellectual from a wealthy family who had gathered a group of 20 followers around him in a remote village in the Correze region.
The group had been under surveillance since he and Levy participated in a meeting with alleged anarchists in New York in January 2008.
Media reports later claimed a British police spy, Mark Kennedy, had infiltrated the group, telling his French colleagues of Coupat's supposed contacts with far-left figures in Germany, Italy and Greece.
Kennedy, who later made headlines in Britain when he was unmasked as an undercover cop spying on environmentalists, reported that Coupat participated in violent anti-globalisation protests against international summit meetings.
Investigators also relied heavily on passages from a 2007 book attributed to Coupat, “The Coming Insurrection”, which they said showed his group had tipped over from radical anarchist politics into terrorism.
But Coupat refused to confirm he was the author, and said police had faked a report claiming to prove he and Levy were at Dhuisy, a town where one of the steel rods was put on a TGV power line on the night of November 7, 2008.
“Neither we, nor investigators, were there,” Coupat, who now directs a theatre troupe in Correze, told French television in a rare interview last week.
“Up to the end, they are ridiculously sticking with something that everyone knows is both fake as well as embarrassing, even scandalous.”
Coupat was released from more than six months in jail as police tried to build a case against him, with Levy also detained for more than two months.
The trial is scheduled to last until March 30.
Url copied to clipboard!