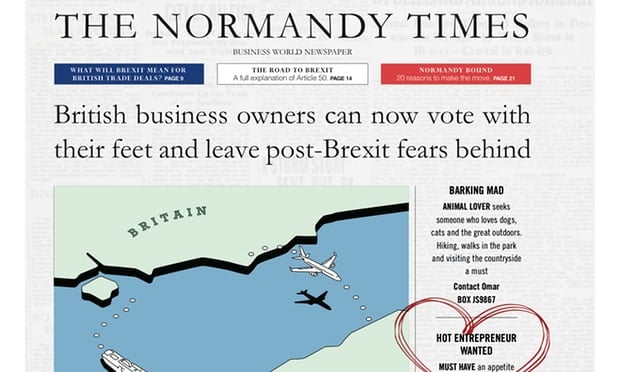 The advertising campaign is being run by the Normandy Development Agency and urges British businesses to escape the UK and relocate to France “to leave their post-Brexit fears behind”.

But Transport for London has decided to ban the adverts on tubes and buses because they contained “images or messages that may cause public controversy or sensitivity” adding that the ads “did not fully comply” with its advertising guidelines.

The latest controversial Brexit-themed ad campaign from France features a fictional newspaper The Normandy Times with the headline: “British business owners can now vote with their feet and leave post-Brexit fears behind”.

“If you didn’t vote for Brexit or it’s not right for your business, why not vote with your feet and open an office, or settle a production unit, in Normandy,” the ad says. “There is still no sign of what a trade agreement with the UK might look like. Now is the time to act.”

The mock newspaper also aimed to tell London commuters that Normandy was “a French Region open to business that enables British companies to thrive in Europe.”

It features a drawing of Britain and Normandy on either sides of the English Channel with a plane and a boat heading from the UK to France, just in case British entrepreneurs needed to know which forms of transport they could use to flee.

It's interesting the Channel Tunnel train link is not including but perhaps Normandy officials does not want to give any free publicity for their neighbouring French region Hauts-de-France.

The advert also carries a mock classified ad saying: “Hot entrepreneur wanted … Someone allergic to post-Brexit tariffs, legislation and restrictions preferred. Does this sound like you? Contact Norman-D”.

Brexit: 'Why the time was right to quit London for Paris' However the Normandy agency has not been put off by he ban and plans to feature some of the ads on a “Magical Norman Tour” bus that will tour British cities including Bristol, Manchester and London.

The provocative adverts will however run in national newspapers in the UK.

Herve Morin, president of the Normandy region, said he was surprised by such “censorship on the part of the authority in charge of the London metro, in a country which is said to be liberal”.

“Our campaign has already been refused twice, so we tried to do it differently this time,” Morin told AFP.

“We are saying to the English and to British businesses that 'there's a place for your in Normandy',” he added.

The region is offering tax breaks and help accessing grants of up to €100,000 (£89,000) to British companies that decamp to France.

The French government and its leader President Emmanuel Macron have been fairly brazen about their attempts to make the most of Brexit by wooing away British businesses and entrepreneurs.

Macron even spoke openly outside Downing Street in London of his plan to persuade “banks, talents, academics and researchers” to head across the Channel.

And in October 2016, just months after the EU referendum in the UK a French advertising campaign by the firm that runs the Paris financial district of La Defense urged UK bankers in the City to “swap London fogs for Paris frogs”.

As well as advertising campaigns the French government has also introduced tax cuts on high earning financial execs on a bid to make Paris more attractive to bankers.