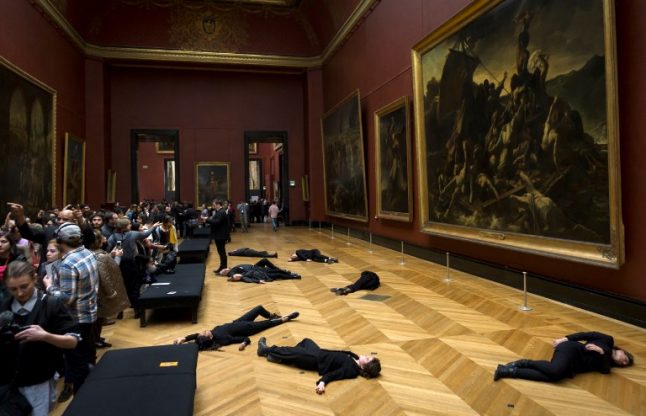 About a dozen protesters lay down on the floor in front of “The Raft of the Medusa”, an iconic 19th-century painting by Theodore Gericault showing the shipwreck of a French navy frigate.

The demonstrators entered inconspicuously before lying down in front of the painting chanting slogans against Total, an AFP reporter said.

The Louvre confirmed it had evacuated museum-goers from the room for around 10 minutes after the protest around 10.30 am (0930 GMT). The activist group 350.org, which campaigns against the use of fossil fuels in favour of renewable energy, said it staged the demonstration “to symbolise
victims of the oil industry”.

The same group carried out a similar protest at the Louvre in March last year in front of an ancient Greek statue, the Winged Victory of Samothrace.

Some 30 activists had laid a long stretch of black fabric at the base of the statue to symbolise a river of oil, urging the Louvre to end its two-decade collaboration with Total. The Total Foundation, the philanthropic arm of the energy giant, supports a range of causes from education to the arts.

Activists have carried out similar protests against fellow oil giant BP in London for its sponsorship of the Tate Gallery, the National Portrait Gallery
and the British Museum.

A group of activist groups led by 350.org have launched the “Free the Louvre” campaign.

The US-founded group takes its name from 350 parts per million, which it says is the safe concentration of carbon dioxide in the atmosphere.