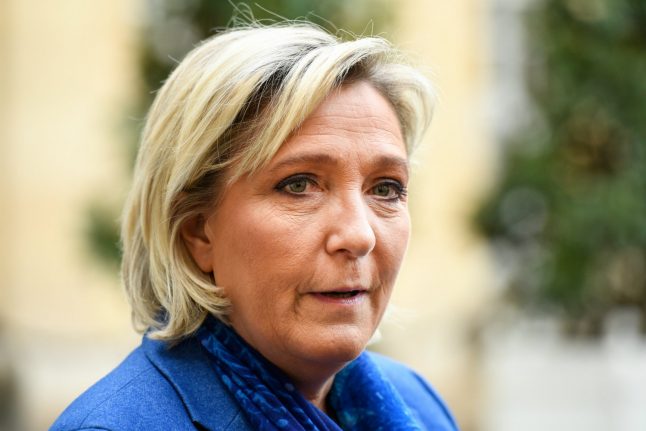 Nine months after Le Pen was defeated by centrist Emmanuel Macron for president in a bruising battle between nationalists and globalists, the FN is struggling to rebound.

Le Pen goes into the conference weakened by her poor performance in a final TV debate against Macron, which raised questions about her fitness to lead the world's fifth-biggest economy.

“Failure is not fatal, it is the courage to continue that counts,” she told reporters recently, quoting British wartime leader Winston Churchill.

The trained lawyer, who took over the FN leadership from her father Jean-Marie Le Pen in 2011, is running unopposed for a third term at the helm at the conference starting Saturday in the northern city of Lille.

The high point will come Sunday when Le Pen will announce a proposed new name for the party, turning a page on the anti-Semitic, openly racist Front of her former paratrooper dad.

“Without a name change we will not be able to forge alliances. And without alliances we will never be able to take power,” she told a party gathering in the eastern Alsace region last month.

Further humiliation is in store for the 89-year-old Jean-Marie Le Pen when the party votes to strip him of his role as honorary president, severing his last formal link to the movement he co-founded and led for nearly four decades.

Since the presidential campaign and June general election in which the FN bagged only eight seats, the party and its leader have appeared deflated.

This week Le Pen seemed heartened by the strong gains made by the allied anti-immigrant League party in Italy's general election, hailing it as a “new stage in the awakening of the people”.

But despite her fighting rhetoric, her appetite for battle appears dented.

The 49-year-old mother of three told French radio recently that she would gladly step aside before the 2022 presidential election if another candidate was “better placed to unite people and help our ideas triumph”.

She made a high-profile appearance last month at a conservative jamboree in the US, fuelling speculation about a comeback.

Marion “doubtlessly has more going for her than me, starting with youth”, her aunt told RTL in unusually frank comments.

The soap opera squabbles of the Le Pen dynasty have kept French media in thrall.

Jean-Marie Le Pen has accused his daughter, who threw him out of the party in 2015 for repeatedly downplaying the Holocaust, of being an ingrate.

“I did the hard graft and Marine Le Pen is now enjoying the fruit of my efforts,” he complained in an interview with Le Journal du Dimanche weekly in February.

He also slammed his daughter over her undoing by Macron in the presidential debate, saying she had “not been equal to the challenge” — a sentiment echoed by many FN members.

“Things were going well until the debate, then she messed up,” Christophe Hingray, a 50-year-old FN member told AFP bluntly at the February 24th party meeting in the Alsace town of Kintzheim.

Others woes have stacked up since.

Marine Le Pen has been charged over her party's alleged misuse of EU expenses as well as for tweeting gruesome images of Islamic State atrocities.

She also fell out with her former right-hand man Florian Philippot, who went on to form his own rival Patriots party.

One of the party's two senators Claudine Kauffman resigned, denouncing “nepotism” in the party in a letter to Le Pen made public Friday. She had earlier been suspended for comparing migrants to “vermin”.

FN members nonetheless give Le Pen credit for massively expanding the party's support, doubling its score from 5.5 million votes in the 2002 presidential election to 10.6 million, or 33.9 percent, in 2017.

Le Pen aims to set up a rematch with Macron in next year's European elections, by forming alliances with other eurosceptic parties around the bloc.

At home she hopes to form pacts with right-wing rivals that have in the past banded together with the left to bar the FN's path to power.

The leader of the main opposition Republicans, right-winger Laurent Wauquiez, has so far ruled out such an alliance.

Le Pen is banking on divisions between pro-Macron centrists and right-wingers tearing his party apart, making the FN France's biggest party of the right.