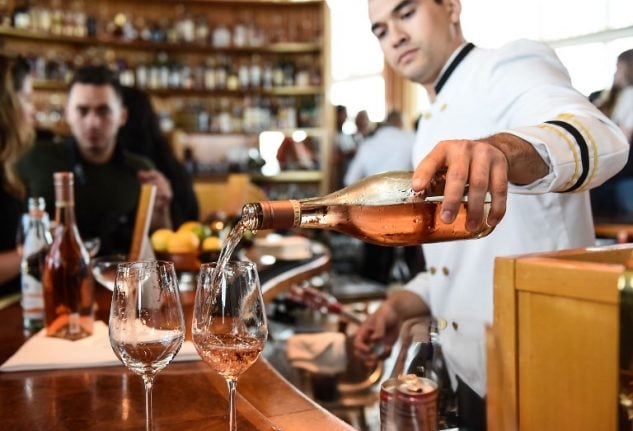 Photo: AFP
The popularity of the drink which was mocked just 20 years ago has reached new heights abroad.
And that's particularly true in the US, with the country accounting for a whopping 50 percent of exports of the Provencal rosé wine last year.
“The phenomenon of the internationalization of rosé wines from Provence is accelerating,” said Brice Eymard, leader of France's Provence Wine Council (CIVP) during a press conference in Paris on Thursday.
“Until 2010-2011, we exported very little, France was the main producer and consumer, but we now see the share of exports sharply accelerating,” he said.
READ ALSO: In the US, some 22 million bottles of rosé wine were sold last year, which accounts for 43 percent Provence rosé exports in volume and half in terms of value.

Though France remains the world's foremost consumer of rose, pulling corks on some eight million hectolitres (176 million gallons) in 2015 alone, its booming popularity in the US has been a major boon for French winegrowers.

“Americans have totally integrated rose into the wine family,” said Olivier Brun, who along with his three brothers runs a family vineyard at Chateau Brigue, at Le Luc-en-Provence in the southeastern Var region.

“It's easily accessible and there's no need to be an expert to enjoy it,” he said.

Some 70 percent of the Brun family's sales are exports — half of them to the United States — “our top market,” where Florida, California, New York and, latterly, Chicago lead the way.

“Over there, rose is drunk in all seasons even in colder cities,” said Brun. “And it flows all summer long in the chic Hamptons,” the Long Island retreat of wealthy New Yorkers.

“Rose sales to the United States began to take off a decade ago thanks to (marketing) efforts by large estates such as Ott and Chateau de Peyrassol, a small pioneer,” says Brun.

But it's not just US wine drinkers who have fallen for the drink with sales increasing all over the world.
In total, nine countries bought more than 10,000 hectoliters in 2017, compared to just two (Belgium and Switzerland) in 2008.