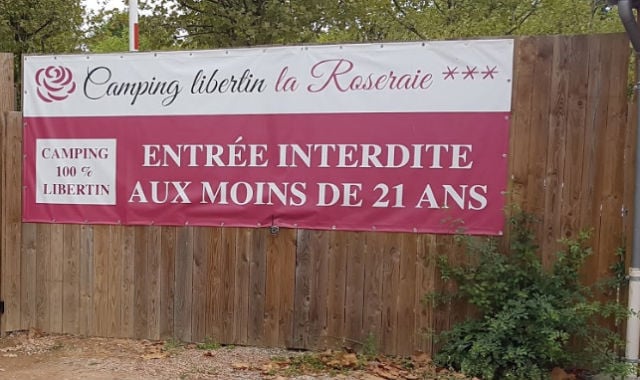 The campsite is located near the village of Brugheas in the Allier department of central France's Auvergne region. It is just 5km from the spa resort of Vichy. How much is it?

The estate agent's advert reads: “First 100 percent libertine campsite in the world for sale. Incredible opportunity with over 20 million libertines identified in northern Europe and 6.5 million in France.” Does that sound like a huge number of free lovers to you?

The campsite used to be an ordinary camping group until it was bought by libertine Francoise Vetter and her husband four years ago and converted into a swingers only getaway.

According to the ad on estate agent Leggett Immobilier the campsite is “situated on almost 5 hectares there are 80 bays of which 21 are mobile homes, 2 bengali tents and a caravan. A big sanitary block, 4 habitable chalets, a licence IV bar, professional restaurant with over 60 seats under a big tent.”

The campsite includes an outdoor swimming pool with “cuddle corners” around it and even a “naughty wood” where libertines can go for a stroll under the trees or partake in any other physical activity they fancy.

Whether you are a libertine or not, if you have a spare two million it sounds like the purchase of the “Camping Libertin la Roseraie” would be a very wise business opportunity.

Current owner Francoise Vetter told The Local that in the first year as a themed campsite she saw a 118 percent increase in turnover.

“We have guests from all over Europe, Holland, Belgium, Britain, Germany and we also get Australians and Americans here. There is enormous potential for the campsite,” Vetter said .

She said that the world's second libertines campsite which opened in Dordogne last year was sold out last summer demonstrating the demand.

“We are selling it because we have hit retirement age and we are tired,” she said.

She believes the campsite, tucked away in the countryside, has an advantage over the famous naturist turned libertine resort Cap d'Agde in the south coast.

“It's not friendly enough at Cap d'Agde but here you can get to know everyone in a couple of days.”

And of course when she says “get to know everyone” she uses the term in the loosest possible sense.

“We do what we want, when we want and with whom we want,” said one online reviewer, while others describe “the delirious ambiance” at post-dinner sex parties (soirées coquins).

Reviews of the campsite are mixed with some describing it as a paradise where you can “forget your daily problems” while others complain of the fearsome pitbull dog who roams the campsite to keep “security”.

Others complain of the strict rules, not so much the one that demands women are respected but the rule that there can only be a certain number of single men allowed at any one time. While others have complained that the ban on sex in the swimming pool is routinely ignored.

Whoever buys the world's fist libertine campsite can of course do what they like with it, but estate agent Lynn Chaulieu from Leggett Immobilier says any buyer would be foolish not to run it as a libertine site given the business potential.

“It has just totally boomed since it became a swingers campsite,” she told The Local. “There's two hectares that can be developed that would double the capacity of the site.”

READ ALSO: So where are all these swinging sex clubs in Paris? For more information on the property visit Leggett Immobilier.

PROPERTY
REVEALED: Where in Europe have house prices and rent costs increased the most?
Url copied to clipboard!