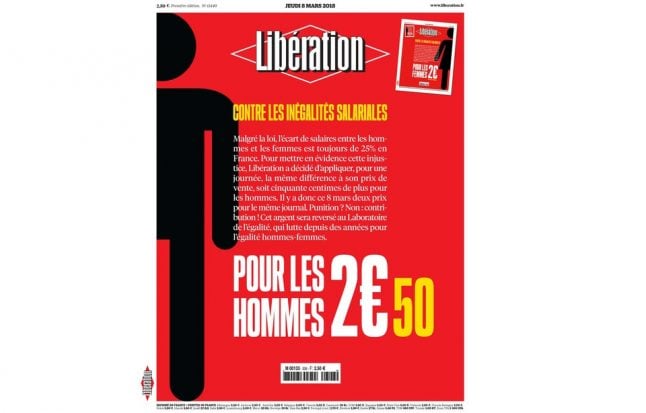 In a front-page message the paper noted that despite equal pay for equal work being enshrined by law since 1972, French women earn on average 25.7 percent less than men, according to a 2017 report from an inequality watchdog.

“To highlight this injustice Liberation has decided to apply the same difference to its sale price for a day, meaning 50 cents more for men,” it
said, adding that profits from the operation would be donated to France's non-governmental Equality Observatory.

Liberation said it was inspired by Canadian monthly Maclean's, which charged men more for its March edition — also to denounce the wage gap.

Companies with “unjustified” disparities will have three years to rectify the situation or face fines of up to 1 percent of their wage bill, he said.

When adjustments for part-time work were factored in, women were still paid on average 17.4 percent less, the report found.

For the same job, women are estimated to be paid nine percent less. 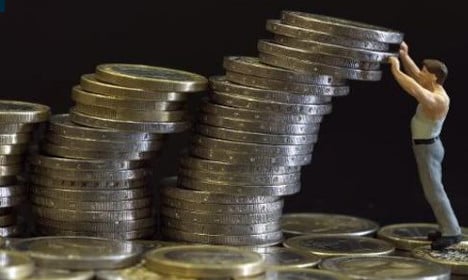 GENDER
France sees jump in gap between rich and poor

Gap between rich and poor has widened in France more than most other developed countries. Photo: AFP
While France's level of income inequality is around equal to the OECD average, it has seen the third highest increase in disposable income inequality during the crisis (2007-2011).
This is a glaring difference from the long term trend in France, where income inequality kept relatively stable in the 1980s compared to countries like the US and Germany.
During the recent crisis, however, income inequality increased by 1.6 percent in France.
The top 10 percent of real incomes in France increased by 2 percent per year during the crisis (compared to an average annual drop of 1 percent throughout the OECD), while the incomes of the bottom ten percent decreased by 1 percent each year (compared to an average annual decrease of 2 percent).
The report also noted that the gender pay gap has not reduced in France since 2000, even though it decreased in many other countries. Women in France still earn 14 percent less than men. While this is slightly better than the OECD average of 15.5 percent, France still has a way to go to catch neighbouring Spain (9 percent) and Italy (11 percent).
In most of the 34 countries in the Organisation for Economic Cooperation and Development the income gap is at its highest level in three decades, with the richest 10 percent of the population earning 9.6 times the income of the poorest 10 percent.
In the 1980s this ratio stood at 7 to 1, the OECD added.
The wealth gap is even larger, with the top 1 percent owning 18 percent and the bottom 40 percent owning only 3 percent of household wealth in 2012.
“We have reached a tipping point. Inequality in OECD countries is at its highest since records began,” said OECD Secretary-General Angel Gurria. As high inequality harms growth prospects, there are economic as well as social arguments for governments to try to address the issue, he said.
“By not addressing inequality, governments are cutting into the social fabric of their countries and hurting their long-term economic growth,” said Gurria.
The study found that the rise in inequality between 1985 and 2005 in 19 OECD countries knocked an estimated 4.7 percentage points off cumulative growth between 1990 and 2010.
An increase in part-time and temporary work contracts as well as self-employment was seen as an important driver of increased inequality, with half of all jobs created in OECD countries between 1995 and 2013 falling into these categories.
The report also found that as inequality rose, there were significant falls in educational attainment and skills among families in lower income groups, thus implying large amounts of wasted potential and lower social mobility.
As wages for women are 15 percent less than for men, ensuring gender equality in employment is one way to reduce inequality.
Redistributive taxes and transfers is another effective option, said the OECD as it noted that existing mechanisms have been weakened in many countries.
“To address this, policies need to ensure that wealthier individuals, but also multinational firms, pay their share of the tax burden,” said the OECD, which has been playing a key role in an international effort to crack down on tax avoidance.
It also encouraged countries to broaden access to better jobs and and encourage greater investment in education and skills throughout working life.
The report found inequality to be highest in Chile, Mexico, Turkey, the United States and Israel among OECD countries.
It was lowest in Denmark, Slovenia, Slovak Republic and Norway.
SHOW COMMENTS
Url copied to clipboard!