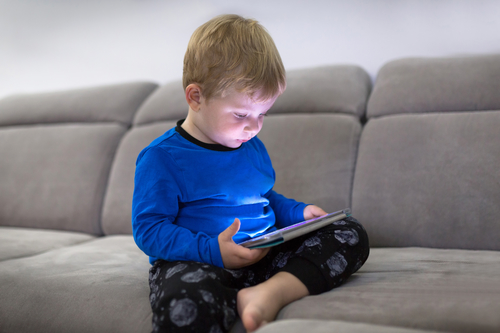 Photo: Patryk_Kosmider/Depositphotos
The government's new “health book” (or “carnet de santé” in French) which contains the latest medical advice for children is set to appear at the beginning of April.
The book, which is free and traditionally handed over by the maternity ward or a doctor, will replace the edition which has been distributed since 2006 with the updated version designed to “take into account the scientific advances and the expectations of health professionals and families”.
Here's a selection of some of the latest recommendations to be included.
No screens for under-threes
In a world where the number of screens is generally increasing, with televisions, smartphones and iPads all competing for a person's attention, this new addition to the carnet de santé is likely to have parents a little concerned.
Not only is the government advising parents to keep children younger than three away from screens, they say they shouldn't be in the same room as one even if they're not watching it.
Many risks, such as causing permanent damage to a child's still-developing brain have been attributed to too much screen time at a young age.
11 compulsory vaccinations
One of the main changes is the new vaccination schedule.
Previously only three child vaccinations were obligatory by law in France: diphtheria, tetanus and polio.
But for children born since January 1st, 11 immunisations against conditions such as measles, hepatitis B, meningitis C, rubella, mumps and whooping cough are now obligatory. Babies under six months in the same bedroom
Another new addition to the list is the recommendation that parents should share a bedroom with babies until they are at least six-months-old.
This is to reduce the risk of unexpected infant death.
Use glass bottles
Parents have also been told to use glass bottles rather than those that contain bisphenol A or BPA, an industrial chemical used to make certain plastics, for the sake of the environment.
Don't shake your baby
Included on the list is the explicit warning that “shaking a baby can leave them disabled for life.”
“If you are exasperated, lay your baby down on the bed (on their back), leave the room and ask for the help of a loved one (family, friend, neighbour …) or a professional,” the book recommends.