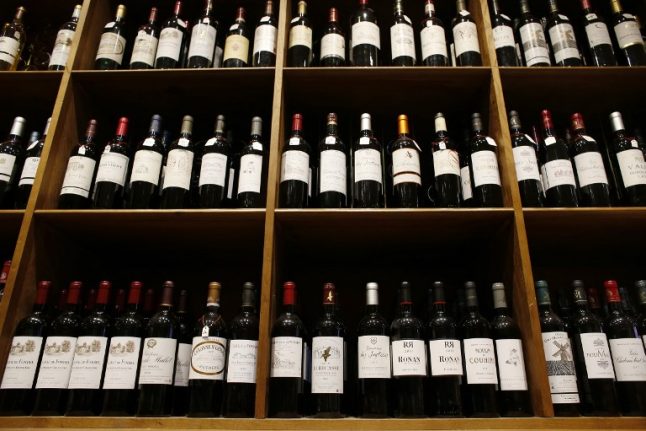 Photo: AFP
Health minister, Agnes Buzyn recently struck a nerve in France when she accused the country's wine industry of practising “double standards” when it comes to selling wine as a soft alcohol.
“The wine industry today claims wine is different from other types of alcohol,” she told France 2. “In terms of public health, it is exactly the same thing to drink wine, beer, vodka, whiskey, there is zero difference.”
Now doctors and academics who signed an open letter published in Le Figaro on Monday have come out in support the minister, saying, “From the point of view of the liver, wine is alcohol.”
READ ALSO: Indeed, the letter went as far as to accuse the French government of prioritizing the wine industry over the health interests of the French people.
“The minister finds herself very much alone in a government that denies the scientific evidence and is more sensitive to the interests of alcohol than the public interest.”
They also stressed that “the effects on health do not depend on the type of alcohol, be it wine, spirits or beer, what matters in terms of toxicity is the amount of alcohol drunk.”
Michel Reynaud, an addiction expert who signed the letter in an interview with French radio station RTL said that wine is as dangerous as the alcohols presented as strong, such as spirits.
“A large majority of French people drink wine for pleasure, but we must remember that alcohol is the most dangerous psychotropic (drugs that affect a person's mental state),” he said.
The signatories of the open letter pointed to the fact that even though French consumption of alcoholic beverages has been “diminishing for half a century, [it] remains one of the strongest in Europe”.
“Alcohol kills 50,000 people a year [in France] and is the second leading cause of cancer after tobacco. Alcohol, especially wine, is the source of domestic violence, marital violence and violence on the street, binge drinking, a significant share of mental illnesses, suicides, accidental deaths and road deaths.” “Long live wine, to drink local wine is to save Occitanie”. Photo: AFP
Backlash
Suggesting wine should be treated like any other kind of alcohol in a country that producers the most wine in the world and whose folk are the second biggest drinkers of the tipple in the world was always going to have people spluttering into their glasses.
Indeed even the health minister's boss, French President Emmanuel Macron came out against her notion that when it comes to health wine was just an alcohol like any other.
In dismissing the idea that he would toughen the existing laws surrounding advertising and alcohol, called the “Loi Evin”, Macron said he had wine every lunch and dinner time.
“There is a blight to public health when young people get drunk at an accelerated speed with alcohol or beer, but it is not the case with wine,” said Macron who said he wouldn't be “annoying the French” with any changes to the law.
And there is certainly not likely to be any support from the wine industry.
In an article also published by right-leaning daily Le Figaro, members of France's Academy of Wine denounced the “full-on attack” by Buzyn, calling it an unfair witch-hunt.
“Stop demonizing wine, which is part of French civilization,” read the title of the open letter.
“Our minister tells us that defending wine culture is an alibi that allows wine growers to sell more and poison consumers,” Gironde senator Nathalie Delattre said, going on to accuse Agnès Buzyn of wanting to make France the “country of prohibition”.