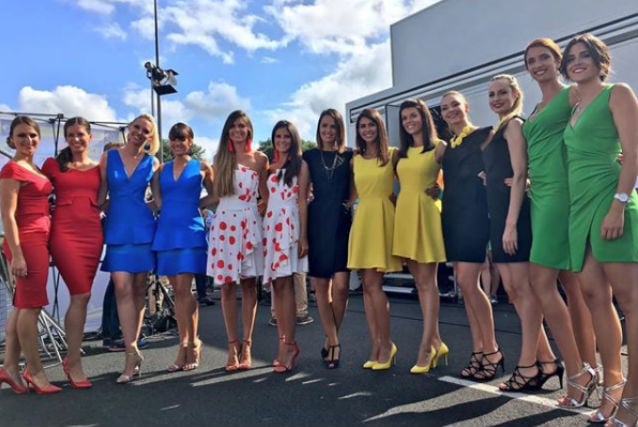 As a result of the increasing pressure in the sports world to stop using scantily-clad women as a promotion tool, the Tour de France is getting ready to bid adieu to its famous podium girls or “hôtesses du Tour” as they are called in French.

Complaints that having winners greeted at the end of each day by models, who present them with the yellow jersey and flowers and shower them with kisses are outdated, are finally starting to resonate.

Race organisers came under even greater pressure when sports such as darts and Formula 1 announced they would top using scantily clad women at events.

That means that this year's Tour de France race, which which begins in Noirmoutier-en-l’Île on July 7, will look different to every other Tour de France since 1930 when the tradition of podium girls reportedly began in earnest.

But before they are gone forever, here are some things to know about the story of the Tour de France podium girls.

They are not allowed to speak to the riders
That's right, they're allowed to kiss the winner on the podium but they aren't allowed to speak to them…at all.
Relationships between podium girls and competitors
Despite this there are many cases of podium girls having relationships with cyclists. Some have even gone on to get married.
In fact, during the 2003 Tour de France race podium girl Melanie Simonneau was given an ultimatum to choose either the competition or cyclist George Hincapie after she accepted a note from him while “on duty”.
She chose Hincapie, eventually married him, and now the pair have two children. Two hostesses kiss French cyclist Richard Virenque. Photo: AFP
The job isn't quite as glamorous as it might look
In fact it's a far from a simple case of swanning onto the podium at the end of the day to bestow a quick kiss on the winner, with the working day of a podium girl often lasting more than 12 hours in all kinds of weather from downpours to sweltering heat.
Starting between 6am and 7am, their duties include serving drinks and snacks to clients and VIPs in the morning, presenting prizes in the afternoon and hosting parties in the evening.
Speaking to the New York Times former podium girl Laura Antoine, a former showgirl from Paris said: “They asked me if I could share a bathroom with two other girls for a month and if I could drive a car up a mountain if I needed to.

“Then they asked me about my endurance level and if I could smile even if I’m tired. And I said I could work all day, with a smile.

“I quickly realised that hey, this isn’t as glamorous as I thought it was.” The pay is fairly good
One of the reasons the job is so sought after is that even though the work is tough, the pay is fairly good.
For three weeks of work, the podium girls can earn up to €2,000. They also receive free board in hotels and all their food is covered.
They aren't taken on just for their looks
…although obviously that's a big part of it what with modelling agencies (as well as individuals) submitting applications for the much-coveted roles.
However their personality, endurance and language abilities are also taken into account.
The final choice is made by the sponsors of the four coloured racing jerseys which are awarded to the cyclists leading in particular categories.
And the final presentation ceremony in Paris — the most prestigious part of the tour — goes to the two women “who will photograph the best on that day” as “some women might have a pimple or might look tired in the eyes,” according to a spokesperson for one of the sponsors. Tour de France 2017's winner Great Britain's Christopher Froome  flanked by two podium girls as he celebrates. Photo: AFP
It used to be much more low key
Podium girls were originally selected from the population of the town where each day's finishing stage was held.
At that point, the only criteria they had to meet was to be under 30 and about the same height as each other.
They have to put up with more than their fair share of bad behaviour
It probably won't come as a surprise that women have had to put up with a lot of misbehaviour in the past.
Indeed in April 2013 Slovak cyclist Peter Sagan recorded an apology after pinching the buttocks of Tour of Flanders podium girl Maya Leye during an awards ceremony.
And there have been many (many) other complaints of groping and sexist jokes.
They are often ridiculed and even insulted.
Last year when asked what he would take with him for his free moments during the Tour, rider Jan Bakelants said: “A packet of condoms, for sure. You never know where those podium chicks have been hanging out.”
He was later forced to apologise.