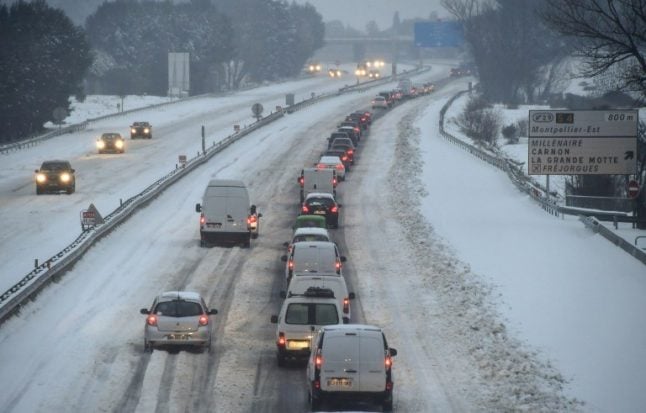 In total, 56 departments in the south, west, central and eastern parts of the country were on orange alert — the second highest warning — mainly for snow and ice, as well as violent winds and floods on Thursday morning. As promised overnight on Wednesday a thin layer of snow coated northern France, while around 20 cm of snow caused chaos in the south west on Wednesday evening. The department of Herault had been placed on red alert due to heavy snow.

Many were evacuated and spent the night in emergency shelters around the region.

The A9 remained closed between Orange and Narbonne on Tursday morning which also provoked huge tailbacks on the A7 in Vaucluse. Motorway authorities blamed truck drivers for not adhering to restrictions that were put in place on Wednesday that barred them from travelling on main routes.

By Thursday morning it was raining in Montpellier but the city's streets remained blanketed in snow meaning public transport had effectively ground to a halt.
Authorities told motorists not to get in their cars for fear of worsening the blockages on roads. “Everything is blocked on Thursday morning in Montpellier, there's no buses and no trams,”on official told French media.

As for the rest of the country, light snowfall was only causing minor disruption  from Brittany across to he greater Paris region of Île-de-France.

In Ile-de-France, where 1-3 cm of snow was expected, the police have “strongly advised against using their cars” until Thursday at 2pm. Most public transport services were running as normal.

In the Riviera resort of Nice snow transformed the beach on Wednesday night. Temperatures were set to rise quite steeply in the south west throughout Thursday to bring an abrupt end to the big chill. However in the north of the country it will take a while longer to warm up.