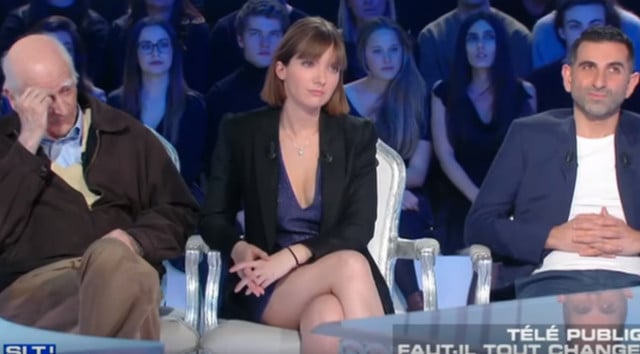 Aurore Bergé (C) on Salut les Terriens. Photo: Neferneferure/Youtube
31-year-old French MP, Aurore Bergé found herself at the centre of a Twitter storm after wearing a short, low-cut dress for her appearance on popular French TV show Salut Les Terriens (Hey Earthlings) on Saturday night.
Although she appeared on the show in her capacity as MP for Emmanuel Macron's La Republique en Marche! party to talk about serious issues such as education and public service reforms, it was her dress, not her words that caught the attention of most viewers.
And many of them took to Twitter to call it out as “vulgar” and “inappropriate”.
One user wrote: “For the attention of everyone defending the outfit worn by Aurore Bergé, an elected official of the Republic, under the pretense of equality…tomorrow, I invite you to let your daughters wear a similar thing to the speaking exam for the baccalaureat.”

One Twitter use wrote: “Low-cut neckline or short skirt, it's one or the other” referring to the “rule” that women should choose one or the other to avoid looking too exposed.

Naturally Bergé responded to her critics, commenting ironically on her own Twitter feed: “I thank all of those who have an opinion on the audiovisual reforms, public service, and education. No, I’m only joking; the real debate in 2018 on Twitter is the length of my dress #ordinarysexism”.
And many members of the public as well as some of her colleagues jumped to her defense.
“Your shocking comments on Aurore Bergé's outfit are nauseating! To say that she is asking to be harassed!! She should dress how she wants! if you have misplaced ideas, is it her fault? You will never learn!” wrote one user.

France's Equalities Minister Marlene Schiappa also jumped into the social media furore.
“This mania of treating female politicians as a 'slut' when they have the audacity to have breasts, legs, or a sex life …Nothing justifies that!”
There is no doubt that some of the comments directed at Bergé in response to her choice of outfit were sexist, disgusting and troubling.  Of course, the horrible trolls that sent her vile messages are not to be sympathised with but that doesn't mean everyone criticising her has a sexist agenda.
However to say that anyone calling the outfit inappropriate is sexist is ridiculous.
Both men and women are expected to adapt the way they dress for different situations and in the same way as women usually don't choose to wear tiny skirts and plunging necklines in the office, men don't strut around in string vests.
One of the reasons for this is that most people want to be taken seriously at work, particularly those with serious work to do.
And it goes without saying that in her private life she should dress however she wants but it is naive to pretend that the way we dress (and that goes for both women and men) doesn't have the capacity to alter how we are perceived, especially in a work environment and especially if you are in politics and on TV.
And despite her claims to the contrary, it's hard to believe that Bergé could have chosen to wear that dress and not questioned her choice.
Defending herself on a different French TV show on Monday, she said: “I rather naively thought that [this kind of sexism] was behind us. I didn't think that in 2018 a woman would continue to be judged according to her clothes, rather than the opinions that she holds.”
“I would not like to be in the heads of those who spend their time commenting on the lives of others,” she added in an appearance that was overflowing with false naivete.
The most irritating part of all this is that it reduces the real feminist issues that should be the focus of those with the power to change the status quo, for example domestic violence, access to jobs and equal pay.
The real goal of feminism is not about a woman's right to wear revealing outfits, in their professional roles, on live TV.