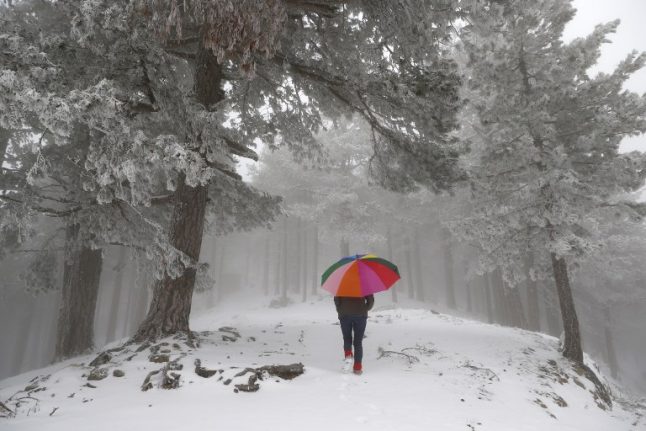 File photo: AFP
Tuesday and Wednesday are expected to be the coldest days of the week, according to France's national weather agency Meteo France as the so-called “Moscow- Paris” icy weather front blows in.
And high winds are expected to “significantly accentuate the feeling of cold” in parts of the country, where due to the wind chill factor it could feel as cold as -18C, according to the agency.
In total, 37 “cold weather plans” have been activated across France which will see an extra 3,000 beds made available for homeless people during the big freeze.

Between Monday and Wednesday, Météo-France forecasts minimum temperatures of -6 C to -10C over the majority of the eastern half of the country including Bourgogne-Franche-Comté region and the Grand-Est regions.
In Paris the mercury was to drop to minus 5C for three consecutive mornings. The last time that happened was back in 1986.
Meanwhile the mercury is set to drop to between 0C and -4C in the Mediterranean and -2C and -6C in the west of the country.
“The highest temperatures will be negative over the majority of the northeast which will hit -4 to 0 degrees,” said Meteo France.
“In the northern half of the country, the northeast wind, which is increasing to 60 to 70 km / h, will significantly accentuate the feeling of cold,” the agency said.
The tweet below shows how cold temperatures will feel with the wind chill.

Three departments in the south east of the country – Alpes-Maritime, Alpes-de-Haute-Provence and Var  – are also on orange alert — the second highest warning — for snow and ice.
The public there are warned to take precautions due the risk posed by the cold weather.
In general health authorities in France are advising people to keep young children and elderly people indoors.
They are also recommending the public to limit physical activity and make sure they are well-covered when outdoors to avoid frostbite, hypothermia and aggravating cardiovascular risks.
France's environment management agency (ADEME) has called on everyone to limit their electricity consumption particularly between the hours of 6 pm and 8 pm.
Fears for the homeless
In France, where temperatures are forecast to drop to minus 10 degrees Celsius (14 degrees Fahrenheit) and feel as low as minus 18 C over the coming days, fears are running high for people living on the streets.
A homeless man in the city of Valence in the country's southeast was found dead on Sunday, and another man was found dead in his cabin in the suburbs of Paris on Friday.
France has opened up extra emergency shelters for the homeless, and in Calais in northern France, about 200 migrants were spared the cold on Saturday night.
Over a year after the French government razed the sprawling Jungle camp, there are still hundreds of migrants around the port of Calais, hoping to stow away on trucks to Britain.
“I'm lucky to be in here where it's warm, outside it's impossible because of the cold,” 20-year-old Afghan Shafiq said.