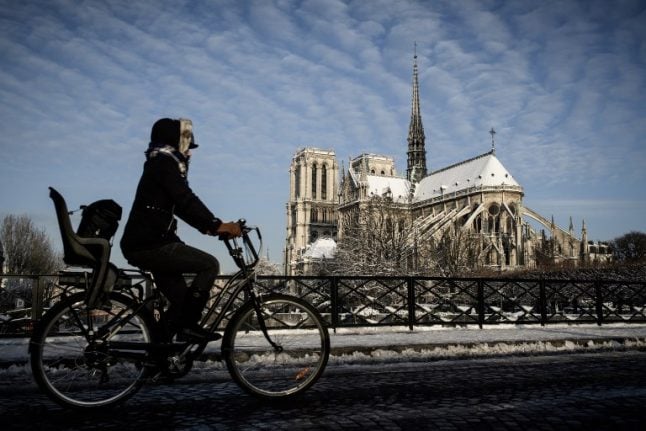 Photo: AFP
With the mercury taking a steep drop in France, it's only natural to reach for your thickest jumper and set up camp in the vicinity of a radiator.
But there are better ways to deal with the cold.
Here's what you should do:
Don't pump up the radiators (too much)
We know, we know…it's almost impossible not to put the heating on as high as possible as soon as you walk through the door after a freezing commute.
But it's important to try.
Apparently, during freezing temperatures, intensively using electrical appliances leads to a higher risk of power failure.
Health authorities have also warned the public about the risk of carbon monoxide poisoning due to defective heating.
So instead of running the risk, it's much better to put on another layer of clothing and make sure the shutters are tightly closed to keep out the cold. Photo: budabar/Depositphotos
Avoid intense physical activity
While it might seem logical that intense exercise is a good way of staying warm during the cold weather, it's actually best to avoid putting your body under too much strain during freezing temperatures.
That's because the body has to work extra hard to stay warm and this is especially true of the heart.
And as a result intense physical activity can aggravate cardiovascular problems, health authorities have warned.
Instead they recommend trying a gentle exercise that focuses on constant movement like walking, cross-country skiing or a slow jog.
And it's especially important to keep an eye on the exercise children are doing, especially for those that suffer from asthma, with cold weather sometimes triggering an attack. Don't just wear a big jumper
Don't think thick jumpers, think layering. When it comes to staying warm, it's the numbers that count.
The air in between each layer of clothing works as an insulator to conserve the heat so it's actually more effective to layer several t-shirts than to wear your trusty thick knit.
That is as long as they're made of the right materials which means warm, thin and not too tight in order to avoid cutting off blood supply.
“Above all, you have to wear a windbreaker,” explorer and doctor Jean-Louis Etienne told France Info.
It's also important to remember to make sure your hands, feet, head and neck, which quickly lose heat, are covered when you're outside.
Don't forget about the most vulnerable
Health authorities have recommended limiting the amount of outdoor time for young infants whose bodies' aren't used to adapting to extreme temperatures.
Newborns can be taken out during the warmest hours of the day but parents are advised to check their temperatures when returning.
Likewise, older people should, who are more vulnerable to cold weather, should be checked up on. Photo: AFP
Don't drink too much alcohol
Everyone knows about the soothing benefits a drink can have after pounding the pavements in icy temperatures.
But in fact, the warming effect of alcoholic drinks is only an illusion and really the feeling of heat comes from the way the alcohol dilates blood vessels.
This sensation hides a lowering body temperature which can pose health risks. To avoid hypothermia, give up drinking (at least to excess) for the next few days.
BUT do eat fatty foods
There are lots of downsides to the cold weather but the good news is that this is your green card to fill up on your favourite fatty foods, expert Jean-Louis Etienne told France Info.
And if you're yet to acquaint yourself with the hearty goodness that is tartiflette, here's everything you need to know.
READ ALSO: