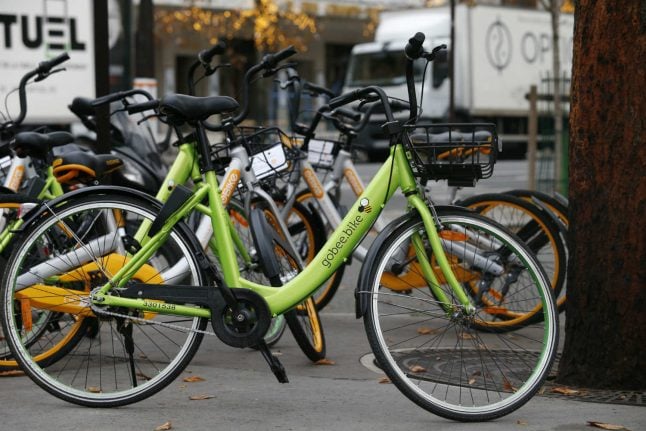 “It is with great sadness that we are officially announcing to our community the termination of Gobee.bike service in France on 24th February 2018,” the Hong Kong-headquartered service said.

“Over the months of December and January, the mass destruction of our fleet has become the new entertainment of underaged individuals,” said Gobee.bike, which had rolled out 2,000 two-wheelers in Paris alone and had some 150,000 users across France.

The company said that “more than a thousand bikes” had been stolen and almost 3,400 damaged nationwide, with almost 300 complaints filed to police and 6,500 repairs needed.

Gobee.bike had already thrown in the towel in the northern cities of Lille and Reims as well as Belgian capital Brussels for the same reason.

The bright green bicycles were located via a smartphone application and hired for 50 cents an hour by swiping a barcode to open the safety lock.

The user, who paid a 15 euro deposit, could then leave the bike anywhere, unlocked.

“It was sad and disappointing to realise that a few individuals could ruin such a beautiful and promising project. We had to come to the conclusion that it could not be viable and there was no other choice for us than shutting down, nationwide,” Gobee.bike said.

Gobee.bike and other rivals such as Ofo or Obike had hoped to bag market share after Paris authorities in January threatened sanctions against the new operator of the city's better known Velib system, over a chaotic rollout under a new contractor that left some 300,000 users seething.

The sturdy grey bikes are a familiar sight in the French capital, popular with tourists and commuters alike a decade after the scheme was launched.

But a redesign and partial switchover to electric versions, plus a change of management from French giant JCDecaux to Franco-Spanish upstart Smovengo proved messy.

After weeks of disruption, just 64 docking stations were operational by mid-January out of 1,460 supposed to be up and running by April. Many riders complained the mobile app regularly crashed while calls to customer service went unanswered.

Smovengo blamed the delays on electrical problems and a legal dispute with JCDecaux.

READ ALSO: Paris: Velib' customers to be reimbursed over issues with bike-sharing scheme