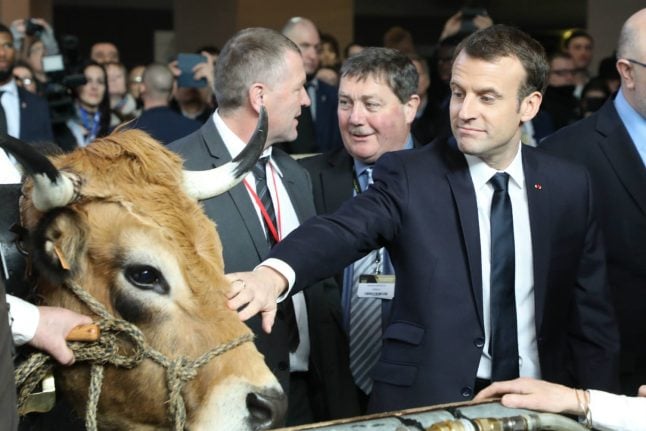 For over 12 hours, Macron listened and responded to critics' rebukes and questions — only to return home to the Elysee Palace with an adopted hen.

“I saw people 500 metres (yards) away, whistling at me,” Macron said, referring to a group of cereal growers protesting against a planned EU free trade pact with a South American bloc, and against the clampdown on weed-killer glyphosate.

“I broke with the plan and with the rules and headed straight to them, and they stopped whistling,” he told reporters.

“No one will be left without a solution,” he said.

Macron was seeking to appease farmers who believe they have no alternative to the widely-used pesticide — which environmental activists say probably causes cancer.

He also wanted to calm fears after France's biggest farm union warned Friday that more than 20,000 farms could go bankrupt if the deal with the Mercosur trade bloc Brazil — the world's top exporter of beef — as well as Argentina, Uruguay and Paraguay) goes ahead.

Meanwhile, Macron was under pressure over a plan to allow the wolf population in the French countryside to grow, if only marginally.

“If you want me to commit to reinforce the means of protection… I will do that,” he responded.

And he called on farmers to accept a decision on minimum price rules for European farmers — “or else the market will decide for us”.

But it wasn't all jeers and snarls for Macron at the fair.

He left the fairground with a red hen in his arms, a gift from a poultry farm owner.

“I'll take it — we'll just have to find a way to protect it from the dog,” he said, referring to his Labrador, Nemo.

It was a far cry from last year, when — as a presidential candidate not yet in office — he was hit on the head by an egg launched by a protester.

READ ALSO: Macron to make theatrical debut as president in Peter and the Wolf