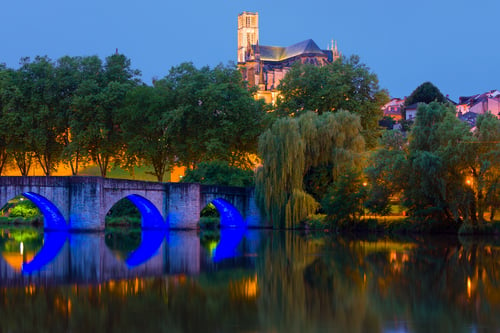 When it comes to beautiful French cities, there are plenty of hidden gems. French town at night/Depositphotos
France is well and truly spoiled when it comes to beautiful cities, so much so that many villes that aren’t that glamorous often get completely overlooked.
But bland can be beautiful in the land of Molière, and a recent survey that looked at the best places to live, points to just that.
The French weekly news magazine L'Express ranked French towns and cities (except Paris) according to factors such as hours of sunshine, cultural offerings, air quality, student population, access to healthcare, safety, proximity to the sea or mountains and property prices to work out just where the best places to live were.
Their findings may have you coughing up your pain au chocolat, or at least rethinking where you'd like to move to. While Rennes in western France topped the ranking we have focussed on the the next six cities in the ranking.
Limoges
Limoges, listed as a Ville d'Art et d'Histoire, it's the birthplace of French painter Renoir. It's located in central western France just off the motorway that links Paris to Toulouse in the south west. (The art-deco railway station at Limoges. Tredok/Flickr)
Travel guides on France might skim over Limoges as a place to visit, but that may be to its residents’ benefit.
The once porcelain capital of France is now a bustling student city of 284,000 in the central department of Haute-Vienne, and according to the L’Express’s quality of life survey, it’s the second best city to live in in France. (The Cathedral Saint-Etienne de Limoges. Patrick Nouhailler/Flickr)
The Michelin travel guide describes Limoges as a “lively city, dotted with attractive boutiques which you can explore as you stroll through the streets and along the developed banks of the river Vienne”.
Angers
Despite its moody sounding name to English speakers, by most accounts Angers (population 395 682) is a bustling, happy-go-lucky city with loads to offer.
Steeped in history from its days as an intellectual hub in the 15th century, the city has a rich cultural offering of museums, festivals, art galleries and medieval chateaux. It also serves as the gateway to the splendid Loire Valley, famed for its gastronomy and natural beauty.
According to Lonely Planet, Angers’ “mostly pedestrianised old town supports a thriving cafe culture, thanks in part to the dynamic presence of 38,000 students, as well as some excellent places to eat”. It’s also just over one hour and a half by train from Paris or three and a half hours’ drive. L'Express ranks Angers as the third best place to live in in France.
Clermont-Ferrand
Back in April 2016, The Local ran a feature that laid out 15 reasons why Clermont-Ferrand is the best place in France.  It was written by a proud former resident who was sick an tired of the ciy being overlooked an it caught the attention of many Clermontois who modestly admitted their city was great but not the best.
The irony is clearly not lost on anyone who snubbed Auvergne’s historical capital (population of around half a million), now that L’Express’s readers have named it the fourth most livable city in France.
Surrounded by ancient volcanoes, Clermont-Ferrand has a majestic twin-turreted cathedral, loads of fountains and squares as well as 18th-century mansions made out of volcanic stone. It’s also ideal for nature lovers with the Parc Naturel Régional des Volcans d'Auvergne a short drive away.
As Lonely Planet puts it, “the blend of Gothic buildings and vibrant bars, plus the growing band of restaurants serving modernised Auvergnat cuisine, make Clermont-Ferrand an utterly refreshing city break.”
Brest
Brest won’t win any beauty contests, that’s for sure. It was quickly rebuilt in a rather functional manner after being almost fully obliterated by bombs during WWII, but that hasn’t stopped this port city in Brittany from being France’s fifth best place to live in according to L’Express.
So what’s there to love? Well if it’s sea you’re after, this coastal city on the West Atlantic is known for its amazing aquarium and sailing competitions, although the waves can get fairly choppy.
Lonely planet calls Brest “big, bold and dynamic” but maybe it’s the unassuming attitude of the city’s 300,000-odd inhabitants that make it the perfect place to live for them.
Saint-Etienne
The Rough Guide to France uses the words “if you must stay” on the half a page it dedicates to this city of 185,000 people in the Rhone Alps region. That’s not to say Saint-Etienne is particularly unsafe or ugly for visitors, it’s just perhaps a bit nondescript.
Formerly known as France’s main armaments manufacturer, this industrial city has smartened up its centre and suburbs over recent decades and is reinventing itself as a design city, including an impressive museum of modern art.
And its old town, as with many towns and cities in France, still has plenty of charm. It’s split by two rivers – Le Rhône and La Saône – and made up of narrow streets, decorative buildings and quirky shops. Lorient
Another city in Brittany makes it into the top ten most livable spots in L’Hexagone (maybe it’s something to do with living by the seaside?).
In Lorient’s case though, it’s possibly a more obvious choice than for its Breton brother of Brest. This small city of just over 200,000 residents has lovely white sand beaches with waves big enough to draw in surfers, a fantastic bay to stroll around, picturesque countryside just outside town and a well-preserved old town.
In August, Lorient plays host to a huge Celtic festival, which draws in thousands of Celtic communities from around Europe.