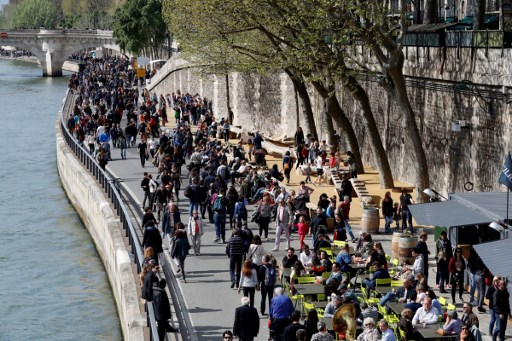 On Wednesday Paris’s Administrative Court annulled the October 2016 municipal decree which gave mayor Anne Hidalgo permission to transform the highway along right bank of Paris’s river Seine into a pedestrian walkway for strollers and cyclists.

Paris’s Administrative Court has decided to revoke this earlier ruling after deciding it was based on a study that contained “omissions and inexact information” concerning the consequences of pedestrianizing the right bank.

The court also decided the mayor didn't actually have the required permission to introduce a permanent ban on cars but only to block access at certain times, for reasons relating to traffic congestion and pollution in the city.

The decision is a blow to the mayor whose move to close the right bank was part of her campaign to fight air pollution in the French capital, which regularly reaches levels that are considered detrimental to residents’ health.

But while Parisians and tourists may enjoy walking along the river without the presence of cars speeding along the Georges-Pompidou Express way, motorists groups and authorities in the suburbs long complained that the closure merely created traffic problems and pollution elsewhere in the capital.

The area in question is 3.3 km long, running from the entrance of the Tuileries tunnel (1st arrondissement) to the exit of the tunnel Henri-IV (4th arrondissement).

But Paris authorities have vowed that despite the court's decision cars will not be reappearing on the right bank anytime soon.

Mayor Anne Hidalgo has announced they would appeal the decision and also take out a new decree for pedestrianizing the right bank.

Her deputy in charge of transport Christophe Najdovski vowed: “there will be no cars returning to the right bank of the Seine in the coming days, weeks or even months.”

The river banks in Paris are currently closed after recent flooding.

Since assuming office in 2014, Paris mayor Anne Hidalgo has made it clear she is not the most car friendly of city leaders.

She has moved to ban diesel vehicles, old trucks, coaches and old cars from the city in a bid to cut pollution.

In 2013, her predecessor Bertrand Delanoë closed the left bank of the Seine to traffic before her 2016 closure of the right bank.