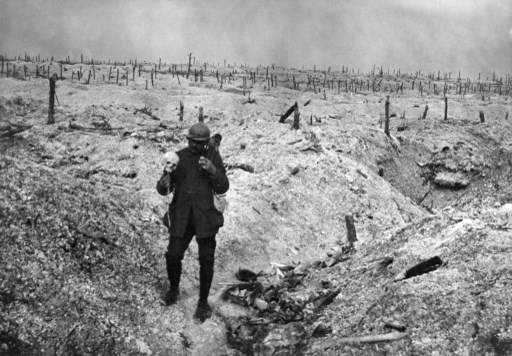 Sergeant Claude Fournier is the first French soldier who died in World War I to be identified by DNA analysis — a process already used by Britain to identify 10 servicemen in 2014.

Fournier's remains were found in May 2015 during construction work at Douaumont memorial, which contains the remains of soldiers who died during the 10-month scorched-earth battle between French and German forces.

Hobnail boots, bayonets, bullets, helmets and a small flask of mint liqueur were also found at the site — along with a military tag belonging to a certain Claude Fournier, who was killed on August 4, 1916, at the age of 35.

The find triggered a quest to formally identify Fournier, who was decorated for his bravery in the longest fight of the war.

Born on November 27, 1880 in Colombier-en-Brionnais, about 400 kilometres (250 miles) south of Verdun, he worked as a gardener in the Lyon area before enlisting in the army in 1900.

Little was known about the infantry soldier who was married with a teenage daughter when he fell under enemy fire.

One of the three skeletons bore some of the traits listed in his army file, but historians could not be sure they had their man until they had a DNA match.

On learning that a local man who died during the war might have been found a century later the mayor of Colombier-en-Brionnais, Jean-Paul Malatier, went looking for his family.

With the help of historical associations he managed to track down a 75-year-old grandson, Robert Allard, to the Riviera, as well as a woman in her 80s who thought she was related to Fournier but no longer lived in the area. DNA samples yielded matches between Allard, the woman and the dead soldier.

But while the Poilu, or “hairy one” as the French called World War I infantrymen, now had a name he did not have a face.

Fournier's daughter — Allard's mother — passed away in 2011 at the age of 101, with only vague recollections of her father.

And all the letters and photographs she left her son were swept away by floods that engulfed his cellar in late 2015.

The only known picture of Fournier was a group shot of soldiers found in a box at the home of Allard's newfound cousin, in which Fournier was listed but not identified.

A frustrated Fremont turned to a police forensics team in Paris, who agreed to reconstruct an image of his face.

Using the soldier's skull and his DNA analysis, they mocked up four images with different hairstyles, beards and moustaches and then compared them with the picture to make a match.

Of some 300,000 men who died in 300 days of fighting in Verdun, around 80,000 are believed to still lie buried in the surrounding forests and fields.

On Wednesday, Fournier will be laid to rest with full military honours in his own tomb at Douaumont memorial.

An emotional Allard will attend the ceremony — “out of duty to my grandfather, a hero among so many heroes, and all the World War I soldiers”.