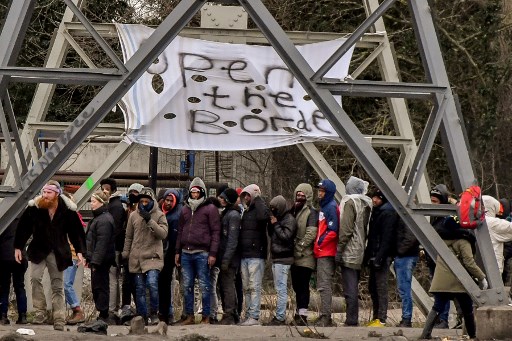 While leftwingers see the bill as too punitive, the right-wing opposition has labelled it too soft.Photo: PHILIPPE HUGUEN/AFP

The draft law, which criminalises illegal border crossings and speeds up procedures to deport economic migrants, was presented to the cabinet of President Emmanuel Macron for the first time.

It has sparked widespread anger from NGOs, who have branded it repressive, but the centrist government insists it is creating a more efficient system to sift out genuine refugees from those simply seeking a better life in France.

“It's a well-balanced law, in line with European law above all, and it is absolutely necessary that countries like Germany, France, Italy, the Netherlands and Sweden have the same type of procedures,” Interior Minister Gerard Collomb told a press conference.

Macron, the 40-year-old centrist elected last May, says the new policy aims to balance “efficiency” with “humanity”, but the issue has become one of the most divisive of his young presidency.

He has highlighted how the law would offer faster asylum procedures for refugees and improve their lives once accepted in France, but some members of his Republic on the Move (LREM) party have broken ranks.

The bill doubles the time that failed asylum seekers can be held in detention to 90 days — a move aimed at making it easier to deport them — and halves the amount of the time applicants have to mount appeals.

“The most vulnerable will be punished,” warned Jean-Michel Clement, an MP who joined the LREM after switching from the Socialists.

Some workers at France's refugee protection office Ofpra went on strike in protest on Wednesday, branding the bill “an unequivocal departure from France's tradition of asylum”.

They joined staff at the asylum court who have been on strike for nine days over their working conditions, with immigration lawyers also raising concerns over aspects of the draft law.

The bill will be introduced in parliament in April, with debate expected to last several weeks.

While leftwingers see it as too punitive, the right-wing opposition has labelled it too soft.

Much of her rhetoric focused on the risk of France being “swamped” by foreigners from Africa.

“If we don't take on this problem, we will not be able to guarantee the right to asylum in France anymore,” Collomb said at the press conference.

NGOs have lashed out in particular at the tougher conditions for failed asylum seekers.

“We're asking for it to be withdrawn,” the Cimade migrants' charity said of the bill.

“We're not even in favour of fighting for changes to the bill, because the philosophy behind it is just too repressive.”

The government said it is also considering proposals on how to better integrate newcomers, including doubling the number of hours of French lessons they get and allowing asylum seekers to work.

The bill also aims to cut the average waiting time on asylum applications from 11 months to six, although staff at the asylum court have raised concerns that the tighter turnaround on cases will make it more difficult to appeal.

A heated parliamentary debate last week on a separate law on taking in “Dublin” migrants — those whose asylum claims are registered in other EU countries — provided a window on how the issue has split Macron backers.

The government has already had to abandon a controversial proposal to deport failed asylum-seekers to third countries deemed “safe”.

Plans by Collomb to carry out immigration checks in homeless shelters have also come under fire in recent weeks.

Left-wing Liberation newspaper noted that while polls showed voters backing tougher immigration laws, the relocation of thousands of migrants to towns and villages nationwide in 2016 went off largely without a hitch.

“The French say they are worried, wary and want conservative migration policies. But once they get to know refugees they also want them to be welcomed,” the paper wrote in an editorial.