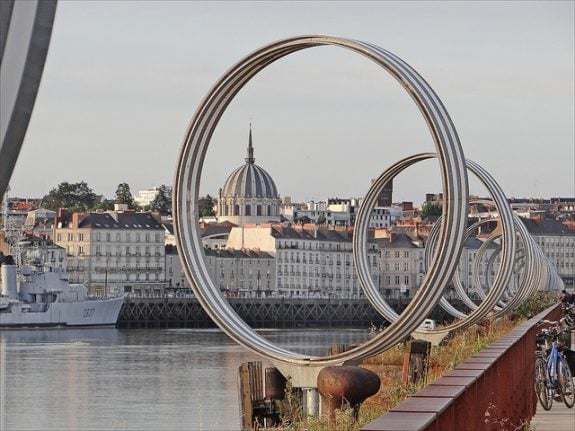 The study by L’Express newspaper ranked Nantes top of the tree for the best place to work out of France's biggest towns and cities apart from Paris.

But it's not just the L'Express study that suggests Nantes is thriving.

In The Local's own study on the best cities in France to live for foreigners, Nantes was ranked second, above Paris (5th) and was only beaten by its close neighbour Rennes.

So why is Nantes the place to be right now?

The president of the city's Chamber of Commerce and Industry previously spelled it out for The Local.

“It’s got a privileged location in the heart of the “Great West” region,” said Yann Trichard.

But it’s also not far from Paris, has a balanced economy and powerful industrial base, he added.

He also stressed the “dynamism and innovation” of companies in Nantes that make it popular. He may have been talking about Faltazi, the Nantes-based company behind the eco-friendly street urinals that could end the plague of wild peeing in Paris.

Somewhat overlooked among French cities, the city on the Loire river surfaced as a dark horse in the competition to rival Paris’s job market, and has seen an incredible influx of people moving there in the last few years.

By 2016, it seemed that people had cottoned on to Nantes’ reputation as a great place to work. It was reported that 7,500 people were moving to Nantes every year.

And businesses are too. According to the local development agency 2016 was a record year for companies relocating to Nantes. Out of the 86 firms that moved into the area, which will help create 1,400 jobs, a third had upped sticks from Paris.

But what about the adopted locals?

Foreigners who live and work in Nantes are not surprised that the city tops the ranking.

“Nantes seems like a city that is dynamic, youthful and open to new ideas,” Miles Watson, an English tutor at the University of Nantes, told the Local. “It was absolutely fine to find a job as an English speaker, albeit in teaching positions,” he said.

“After three weeks, I had found my two jobs, and had turned down other teaching roles along the way.”

Finding positions outside of teaching may be trickier for English speakers, as locals say that French firms will often prefer French applicants, and few companies in Nantes target English-speaking graduates.

This could change as Nantes business district EuroNantes continues to grow and pulls in international businesses.

Just an hour's drive to Nantes-Saint-Nazaire, France’s fourth biggest port, Nantes has a natural advantage as a gateway to the Atlantic.

Small businesses can also thrive from the low rent, especially in comparison to Paris.

“Rent is about 60 percent cheaper than it is in Paris,” said Brady Peter, owner of Brady’s Irish pub in Nantes.

“In Paris I would never have been able to get what I have here.”

A top place to live

Nantes isn’t just a city of all work and no play. Time magazine’s “secret capitals of Europe” edition named Nantes as the best place in France for quality of life in 2004. In The Local's study on the best city in France to live for foreigners Nantes scored highly in some key areas, including low rent prices, amount of green spaces, low unemployment rates and air links to the UK. (CLICK HERE for all the data)

Locals say it's a great place for family life, calmer than some bigger cities in France, but with plenty of bars and enough going on that there's always something to do.

Commuters know that the trip to and from work can make or break a day, but you don’t have to worry about a miserable commute in Nantes. The local ‘Nantais’ population rave about the public transport, which is known for its efficiency and ease of access.

In 1985 Nantes became the first city in France to build a modern tramway system, which snakes through the city’s wide, open boulevards and makes getting about fast and simple.

You can also get to Paris via the 26 TGV trains a day in less than two hours.

A city of culture

A thriving cultural sector isn’t just good fun for residents, but an important source of income and jobs for any city.

Nantes’ lively cultural scene is renowned, and draws in tourism for the unique and playful installation art which dots the city. But it hasn’t always been this way. The 20th century wasn’t kind to Nantes, its historic waterways were filled in between the world wars (creating the wide streets), it lost its historical title as part of Brittany and suffered heavy bombing during WWII, forever changing the face of the city.

In 1987 Nantes was dealt another blow when the naval shipyards that historically formed the backbone of its industry were closed.

As a result, Nantes’s cultural outlook was distinctly glum and nostalgic.

“The city was culturally dead when I arrived here,” said Jean Blaise, an art director who, along with Mayor Jean-Marc Ayrault, devised a plan to transform the city into a cultural hub.

The project saw public spaces given new life by creating free public art installations around the city and a yearly arts festival called Les Allumées which ran from 1990 to 1995.

A decade later, Nantes gained a National Theatre and an all new creative space made from the old biscuit factory called 'The Unique Space'.

This plan is credited with transforming the feel of the city and giving it the more modern, global outlook it has today and encouraging business in all sectors.

“This cultural strategy…has considerably changed the image of Nantes, making it creative and attractive,” says a report by art think tank The Contemporary Art Observatory. The theatre company La Machine, which created the giant mechanical spider that touched down in Liverpool in 2008, base their workshop in Nantes. Visitors can ride the 40ft elephant complete with outdoor terrace and working water-spraying trunk – not a bad way to get around.

Is it time we all moved to Nantes?

If it's classic, historic French beauty you're after, Bordeaux or Paris might be a better bet, but if you want to work in a dynamic city that reflects France's future, not just its past, it's time to pack your bags for Nantes.

A previous version of this story was published in February 2017.