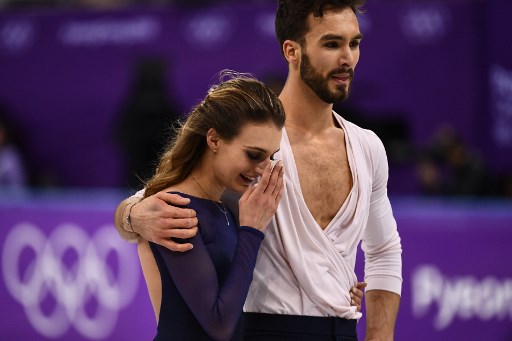 This time there were tears of joy from Papadakis after achieving an Olympic record and winning silver. Photo: ARIS MESSINIS/AFP

French duo Guillaume Cizeron and Gabriella Papadakis showed incredible resilience and determination to silence all the doubters, in the aftermath one of the biggest bloopers in recent ice skating history.

The pair, skating in their first Olympics, performed a near-perfect long dance to get a record total of 123.35 for the segment, the highest in Olympic history.

They finished second only behind the Canadian pair Tessa Virtue and Scott Moir, who also delivered their own amazing performance to just edge past with 206.07 vs 205.28.

All this less than 24 hours after the self-described “nightmare” incident in which Papadakis breast was left briefly exposed to the shock of millions of international TV viewers.

It was during their first dance at the Pyeongchang 2018 Winter Olympic Games on Monday that the young skater leaned backwards early on in her routine and Cizeron inadvertently unclipped the back of her green costume.

The duo were still able to finish their short dance as Papadakis tried to keep her chest covered, but she left the ice in tears.

Compounding her embarrassment, the incident was replayed in slow motion on screens at the arena.

But the duo’s amazing ability to stay focused in the face of adversity will no doubt ensure their performance is remembered as much for their ice skating prowess as for the unfortunate wardrobe mishap.