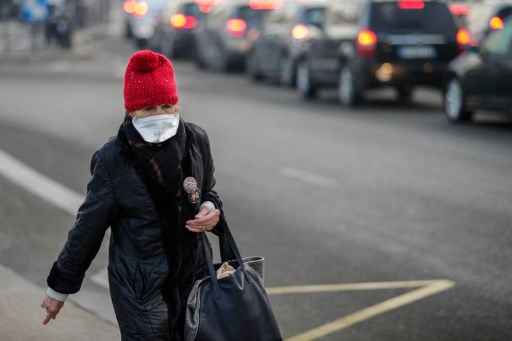 A 2016 study found that air pollution is behind the deaths of 48,000 people in France every year. GEOFFROY VAN DER HASSELT / AFP
Paris is set to officially surpass the “warning” threshold for poor air quality.
According to Airparif, the air quality monitoring network for Ile-de-France, the concentration of unhealthy fine particles in the atmosphere is expected to be between 45 and 55 μg / m3.
The warning threshold is of 50 μg / m3, leading Airparif to expect a dangerously high level of air pollution in the capital unless the city’s residents take drastic action.
Paris police are calling on drivers and motorists in Ile-de-France to reduce their speed from 130 km / h to 110 km / h on the motorways, from 110 km / h to 90 km / h on fast lanes and dual carriageways, and from 90 km / h to 70 km / h elsewhere.
Anyone driving a vehicle over 3,5 tonnes in weight are also asked to avoid the capital.
“Ile-de-France is experiencing a new episode of fine-particle air pollution, as a result of unfavorable weather, the emission of pollutants into the atmosphere, as well as wood burning and city traffic,” Paris police explained in a press brief.
City authorities are also asking Parisians to limit their indoor heating and avoid lighting wood fires and burning green waste in the open air.

Fine-particles such as “PM2.5 particles”, which are particulate matter measuring 2.5 micrometres or less, are known to produce respiratory and cardiovascular illness.
These particles are small enough to invade even the smallest airways of the human body.
A 2016 study found that air pollution is behind the deaths of 48,000 people in France every year, arguing that most of the deaths are preventable.
According to the World Health Organization, over 47 million French people are exposed to a level of these fine particles that is considered to be unsafe.