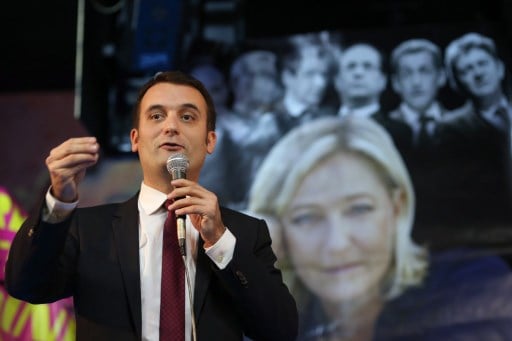 Florian Philippot (left) now poses a grave threat to Marine Le Pen's far-right support base. Source: Kenzo Triboullard/AFP
Five months after being forced out of his role as number 2 in France's far-right National Front, euroskeptic MEP Florian Philippot has officially launched his own party, the heroic-sounding Les Patriotes (The Patriots).
This may explain why the 36-year-old picked the northern city of Arras, birthplace of 18th French revolutionary Robespierre, to hold his opening speech.
“It feels good to be yourself, it feels good to be free!” he joyfully told a crowd of 500.
But now that Philoppot has escaped the political shackles of former boss and current nemesis Marine Le Pen, is his “patriot” movement really likely to be that different from other nationalist groups in France? Here’s what we know so far:
Far right foundations
Philippot actually set up Les Patriotes while still working as chief strategist and deputy leader for the National Front.
Following the FN’s poor showing in the second round of last May’s presidential election, Philippot set up his movement, saying at the time that it would spread Le Pen’s message.
But this new branch of the party became a source of anger among disgruntled FN leaders, eventually resulting in Le Pen demanding Philippot quit the leadership of Les Patriotes.
When he refused, he was reappointed “vice-president of nothing,” Philippot claims. A taste for revenge? Philippot has called Le Pen's Front National “embittered” and “lost” after last year's election debacle. Photo: AFP
Claims to be best of left and right
“We want to gather the best that the right has to offer and the best the left has to offer in order to give France the best,” Philippot concluded at Les Patriotes’s opening party speech.
This was preceded by a mix of political rhetoric that included calling for a 15 percent increase in minimum wage, a crackdown on tax evasion, better pensions and more care for the elderly and for dependents of the state, an end to mass migration and a complete exit from the EU.
“Political extremes are dead ends,” Philippot argues.
This mishmash of rightist and leftist ambitions has been quashed by many political analysts, who allege Les Patriotes are quite plainly far-right.
While interviewed by France 24, academic Sylvain Crepon argued that despite an anti-immigration speech lighter than that of the National Front, Les Patriotes show little difference to the latter.
French TV channel LCI claims Florian Philippot “took with him a good part of the Gaullist line of the FN and, with his depature, completes the umpteenth rupture within France’s far-right.”
Ahead of last May's presidential elections, President Macron was also widely quoted as describing his party La Republique On Marche as “neither left nor right” leaning.
Big NO to migration
Under his new role as chief “Patriot”, Philippot’s discourse on immigration remains almost identical to that of his Front National days.
“Mass migration can no longer continue because it dries up entire regions, in the countries of origin,” he claims.
He alluded to a potential pact with the African countries focused more on their development and called for Islamic terrorists to be stripped of their nationality.

Frexit for France
According to the far-right party's website, The Patriots want France’s immediate departure from the European Union.
“(The media) continues to present Brexit as Saint Macron's apocalypse!” Philippot joked.
“We will introduce a new currency, which I will call the franc.”
Philippot’s tough anti-euro stance could stand him in good stead with France’s diehard eurosceptics, as the Front National has recently softened its criticism of the single currency, after critics blamed it for the party’s presidential debacle.
Philippot however remains adamant: “Leaving the EU will be our salvation. With Frexit we’ll prove to our compatriots that you can reform Europe by leaving the euro and Schengen” .
Farage is a fan
Unsurprisingly, UKIP’s former chief Nigel Farage seems to have taken a liking to Philippot and his party.
In fact this mutual appreciation for each other’s policies and opinions is best evidenced on Sunday’s live-streamed YouTube upload of Les Patriotes’ opening rally.
The video starts with Nigel Farage wishing Les Patriotes luck and arguing: “I’ve seen all forms of French euroscepticism over the past twenty years. But never before have I seen a French political party who clearly and unequivocally say that France should be an independent country that makes its own laws, controls its own borders and has its own currency”.
After comparing Gandhi’s fight for Indian independence with the Brexit movement he spearheaded, Farage goes on to encourage Philippot to stick by his anti-EU stance, wishing him “bonne chance” (good luck in French).
Florian the patriot
“Patriotism is the future, patriotism is peace, it is unity, it is the historic opportunity to reconcile with what remains of the left and what remains of the right with just one idea, France, ” Philippot said. Common sense or sugarcoated populism?
Not a force to be reckoned with, yet
It’s still very early days for Les Patriotes. With only three MEPs (Florian Philippot, Sophie Montel and Mireille d'Ornano), a national deputy (José Évrard) and an unverifiable 3,000 party affiliates, the party is currently struggling to make itself known.
But France’s newest political party potentially has its biggest asset in its leader.
Philippot is widely considered to have been a key architect in helping to detoxify the far-right, racist image of the Front National. His strategic abilities and policy writing could increase Les Patriotes' popularity, but potentially further fragment France’s far-right support base.
What's clear is that Philippot does represent a different, more modernised version of the far right. Openly gay, many claim it was his sexual orientation that led many of the FN's old guard to detest him and call for his resignation.
By Alex Dunham