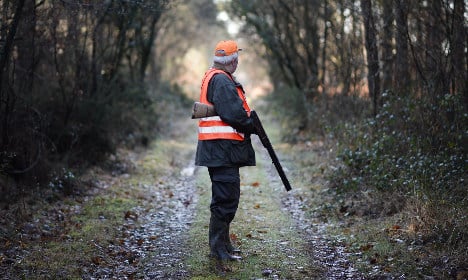 Photo: AFP
The gendarmes told the French press that one of the hunters found the man lying on the ground with his rifle at his side.
On average there are around 20 deaths each year during France's hunting season. In recent years, The Local has reported how joggers, hikers, mushroom pickers, motorists, even gardeners have routinely been killed by stray bullets from rifles that were meant to kill wild boars, deer or pheasants.
And our readers have also told us their stories of how the hunting season ruins the peace, tranquility and the feeling of safety for those living in rural France.
“I grew up learning how not to go outdoors during hunting season, making sure to wear brightly coloured clothes and pretty much being terrified of getting shot during those times because it's something that sadly happens very regularly,” Julia Kornig, who grew up in the Vauclause, told The Local.