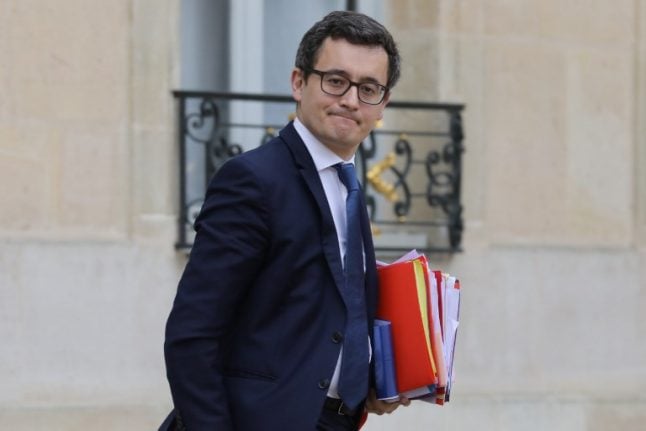 French Minister of Public Action and Accounts Gérald Darmanin leaves the Elysee palace following the weekly Cabinet meeting on Wednesday. PHOTO: LUDOVIC MARIN / AFP
The Paris prosecutor's office said a preliminary probe had failed to establish “the absence of consent on the part of the complainant” or that she was acting “under constraint, threat, surprise or any sort of violence towards her.”
Darmanin, one of the star performers in President Emmanuel Macron's centrist government, had furiously denied pressuring the former call girl into sex in return for a promise to help her clear her name.
Welcoming Friday's decision, the 35-year-old minister thanked those who had supported him “in this difficult time” and said: “Since the start of this slander I have always kept my trust in the justice system.”
But he is still under investigation over separate allegations made by another woman who accused him of using his position to ask for sexual favours.
The allegations come in the midst of a global outpouring of accounts of sexual harassment and rape unleashed by the revelations about Hollywood mogul Harvey Weinstein.
Darmanin's first accuser, 46-year-old Sophie Spatz, made a formal complaint against him in mid-2017, shortly after he was appointed to Macron's first cabinet. Spatz said she had asked for Darmanin's help in 2009 — he was a legal advisor in the ruling right-wing UMP party at the time — to try to have a suspended sentence lifted for blackmail involving a former boyfriend.
But the investigation was closed soon afterwards when she failed to attend questioning by the police. In mid-January she renewed her complaint, triggering a new probe.
Le Monde quoted her as telling police that when she approached Darmanin for help he placed a hand on hers and told her: “You too must help me”, and that she felt pressured into sex.
Spotlight on star environmentalist
This week, a second woman came forward to accuse Darmanin of using his position to ask for sexual favours while mayor of the northern city of Tourcoing between 2014 and 2017 — allegations he also denied. The woman said she asked Darmanin's help in getting moved out of her dingy apartment into social housing and that he “then made advances”, sources close to the investigation said.
Darmanin is not the only minister to have become embroiled in allegations of sexual assault. It emerged last week that Environment Minister Nicolas Hulot was accused a decade ago of raping the granddaughter of former French president Francois Mitterrand in 1997.
Pascale Mitterrand, who confirmed she was the woman behind the complaint after being named by French media, chose to file the complaint after the deadline to report the alleged assault had passed, meaning it was never investigated.
Hulot, a celebrity environmentalist, went on television to deny the “shameful” rumours before they were published.
Prime Minister Edouard Philippe has called for respect for the principle of innocent until proven guilty and said ministers will keep their jobs unless charged with an offence.
But the allegations against Darmanin and Hulot have put Macron in an uncomfortable position, given his focus on women's rights which he has promised to make a “national cause.”
The opposition has pointed out that four other ministers were shown the door or resigned last year after being embroiled by allegations of nepotism or misspending public funds — even though they had yet to be charged.
By AFP's Benjamin LeGrende and Clare Byrne