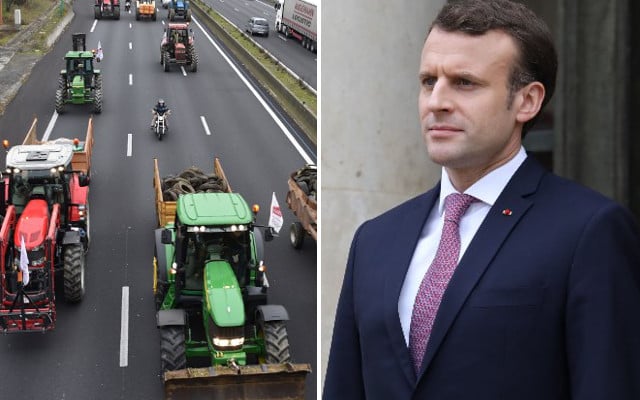 Photos: AFP
Farmers across France have been blockading roads and causing traffic chaos to raise the alarm that “villages could die” if their voices are not heard.
But that hasn't stopped Macron from inviting 1,000 of them, specifically those aged under 35, to the Elysée Palace in advance of Paris's annual Agricultural Fair.
“They will be representative of all areas of production and all regions and will include as many women as men,” announced the Elysée.
But the meeting could prove to be a tense one, with farmers currently up in arms over the government's plans to reduce the number of agricultural areas that qualify for farming subsidies from the European Union.
READ ALSO: Photo: AFP
At the moment farming areas deemed “less favoured” are entitled to funding but the French government has proposed to reduce the number of areas that qualify by 100.
The decision was set to be made on February 15th. However, it has since been postponed until the European Commission reaches an agreement on the matter.
If it does go ahead, the areas around the southern city of Toulouse and the Haute Garonne department in the southwest will be among the most affected, with protesters saying it would deprive them of as much as €7,000 a year.
And farmers across the country, particularly in the southwest, have recently been taking to the roads to show their anger.
Recently they blocked roads and motorways around the city of Toulouse and the nearby town of Montauban, set fire to piles of tires, palettes and hay and even grilled sausages for picnics on the motorway.
“At the moment, we are very motivated to not give an inch,” Sophie Maniago from the FDSEA farmers union recently told Le Point.
“We're talking about the demise of farms. We would have losses of between €8,000 and €10,000. These are territories which are shutting down, which are going to become deserted, villages that are going to die,” she added.