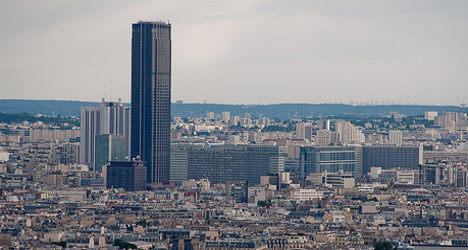 Montparnasse Tower has always been considered austere and vastly out of keeping with the city's largely Haussmannian appearance. Source: Josh Veitch Michaelis/Flickr
France’s Europe Ecologie-Les Verts party has put forward the online petition under the slogan “Stop the Towers”, calling on all Parisians to voice their opinion on the recent revival of skyscrapers in the city.
Together with a number of residential and environmental groups, they’re calling for the construction of all impending skyscrapers in the city to be halted.
These include the soon-to-be-revamped Tour Montparnasse (an urban eyesore for many Parisians), the Duo Towers going up in the 13th arrondissement and the Tour Triangle project being build since 2017 in Versailles.
“We refuse to let Paris be any more densely populated than it already is, we’re currently one of the most overpopulated cities in the world,” the petition reads.
“What we need are new breathing spaces”.

Europe Ecologie-Les Verts also argue that these new high-rise structure won’t address the issue of housing in the city, as they’ll be used primarily as office, hotel and retail space.
“As soon as it has 5,000 signatures, we’ll be able to present the case before the Paris Council in order to request a referendum on all new high rises in Paris” EELV advisor Yves Contassot is quoted as saying by BFMTV.
France’s main green party was able to convince the Paris Council to halt building plans of another skyscraper – Triangle Tower 2- in November 2014, but building was approved six months later when the developer presented new plans for the project.
Url copied to clipboard!