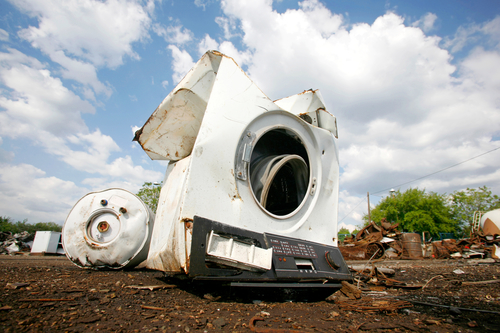 France has long been at the forefront in the fight against planned obsolescence globally. Source: Deposit Photos
France’s government is contemplating whether to introduce a measure that would see all electronic goods and home appliances sold in the country carry labels that inform the general public of the products’ actual lifespan.
The stickers would take the shape of a colour index similar to those found on energy consumption labels on household appliances like washing machines. Each product will get a grade from 1 to 10, rated for its build quality, repairability and durability.
If the measure is approved, it will be voluntary from 2020 onwards and then made mandatory, Secretary of State to the Minister for the Ecological and Inclusive Transition Brune Poirson is reported as saying by Le Parisien.
“This law could extend the lifecycle of products and fight both an environmental and economic fallacy,” she added.
Preplanned obsolescence is defined as an industrial practice and economic model that sees goods of all types deliberately made to last for a short period of time.
This way companies generate better long-term sales than when goods were made to last forever, and in the process satisfy the needs of trend-hungry consumers looking to renew their goods.

France has long been at the forefront in the fight against planned obsolescence globally, making it a criminal offence in the 2015 law on energy transition.
With this initial draft on product lifespan, made public on February 12th 2018, the French government is hinting again at plans to move away from the traditional linear economic models that encourage wastefulness and consumerism towards a more circular model, expected to be less harmful for the environment and fairer to the general public.
France will also put forward the issue of the extension of warranties on products to the European Commission, with Poirson hoping to convince her EU counterparts to extend the warranty on washing machines from 2 to 5 years.
Url copied to clipboard!