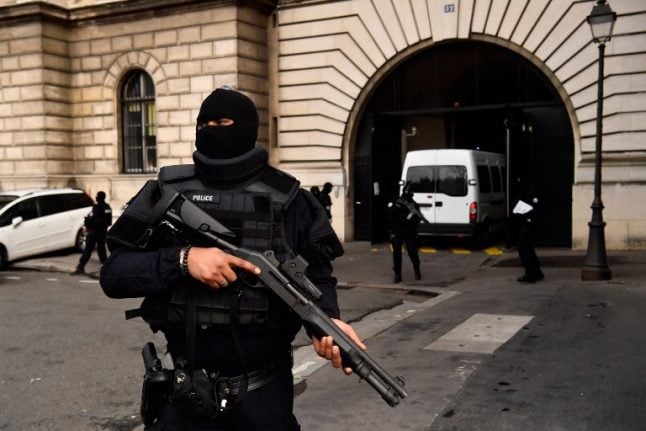 Armed French police stands guard as a van carrying Jawad Bendaoud arrives at court. Photo: AFP
Mohamed Soumah, a convicted petty criminal, was handed a five-year jail term for helping two IS jihadists find a hideout after the November 13, 2015 attacks, the worst on French soil since World War II.
And Youssef Ait Boulahcen, the cousin of the attacks' ringleader Abdelhamid Abaaoud, was given a four-year sentence with one year suspended for “failing to report a terrorist crime”.
The court has been packed for the trial, which started days before a separate case in Belgium involving Salah Abdeslam, believed to be the only surviving attacker from the Paris atrocities.
The focus of the trial had been 31-year-old Jawad Bendaoud (see photo below), a drug dealer who became a media sensation in France after renting his flat to the two jihadists but insisting nothing about them had seemed suspicious. Jawad Bendaou. AFP PHOTO / BFMTV
Bendaoud became a national laughing stock after giving an infamous TV interview in which he insisted “I didn't know they were terrorists”, despite the country having been on lockdown on the hunt for fugitive jihadists at the time.
He was cleared on Wednesday.
Bendaoud argued he had previously rented his grubby flat in the Paris suburb of Saint-Denis to Eastern European gangsters without asking any questions, and that all he knew about the men who arrived after the attacks was that they wanted somewhere with water where they could pray.
Abaaoud and his accomplice Chakib Akrouh were killed in a massive police raid at the apartment on November 18, five days after the attacks.
They were believed to have been planning a fresh suicide attack on the French capital's La Defense business district when they were killed.
Prosecutors had sought a four-year jail term for Bendaoud and initially tried to argue he knew he was harbouring terrorists, but judge Isabelle Prevost-Desprez said there was no evidence against him.
“It cannot be proven that Jawad Bendaoud provided accommodation to the terrorists… in order to shelter them from being found,” Prevost-Desprez told the court.
Bendaoud, who has played the clown before a packed courtroom since February 24, raised his arms in triumph and clapped his police guards on the shoulder as Prevost-Desprez handed down the verdict. One of the plaintiff's lawyers walks down the stairs towards journalists. Photo: AFP
One-man show
While it is his co-defendants that are going to jail, Bendaoud, who has been held in isolation for much of the past two years, dominated the trial with dramatic and comic outbursts.
At one point he complained that no one would want to join his cocaine-dealing ventures now because of the unwanted publicity, and at another he regaled the courtroom with a tale about bonding with a rat in prison.
Relatives of the victims said during the trial that his antics had deepened their anguish.
“I was outraged to hear laughter during these debates,” said Patrick, who like other victims' relatives was only identified by their first names during the trial at their request.
“I'm not here to see a show,” said the man, whose daughter Nathalie was killed at the Bataclan concert-goers where the jihadists gunned down and blew up 90 people enjoying a show by California rockers Eagles of Death Metal.
Despite the one-liners, both Bendaoud and Soumah had appeared moved by parents' testimony, which at one point reduced both of them to tears.
Boulahcen, whose sister Hasna was killed alongside the two jihadists in the raid on the apartment, had not been held in custody during the trial.
Bendaoud was set to be released on Wednesday night, a prison source said.