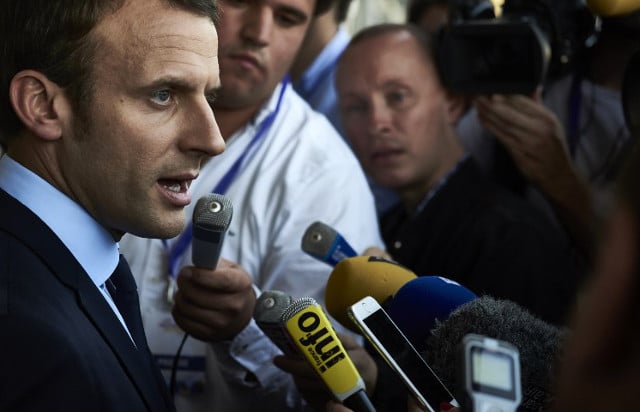 Photo: AFP
Reporters have had a press room inside the Elysee for the past four decades from which to cover press conferences, foreign leaders' visits and other events.
AFP and other news agencies have permanent desks there, notably allowing them to see who is arriving for meetings with the president thanks to the press room's location overlooking the main courtyard.
But Macron's communications advisor Sibeth Ndiaye told reporters the presidency had decided to move the press room into an annexe down the street “in order to make it bigger”.
The move will take place by the summer, she said.
READ ALSO: Asked if Macron was trying to “get the press out of the way”, Ndiaye said that was “not the president's intention”.
Macron had made no secret of his desire to see journalists booted from the main Elysee building when he was elected in May, but the idea was put on the backburner after it prompted an uproar from the media.
The current press room will become a meeting room for presidential advisors, Ndiaye said, insisting the decision was made for “practical reasons”.
The move is the latest of a string of signs from Macron that he intends to keep a much tighter leash on the media than his gossip-loving predecessor Francois Hollande.
Hollande regularly chatted to reporters off-the-record and was ultimately damaged by a tell-all book, “A President Shouldn't Say That”, published at the end of his term based on his conversations with two political journalists.
Macron gave a nearly two-hour briefing to reporters on a range of issues on Tuesday night, but press access to the president has so far been tightly controlled.
He drew mockery early in his presidency for comparing his job to that of the Roman king of the gods Jupiter, staying above the fray of daily politics and giving few interviews.
Centre-right president Valery Giscard d'Estaing, in power from 1974 to 1981, was the first to allow journalists an office at the Elysee.
His Socialist successor Francois Mitterrand moved it to its current location on the courtyard, where journalists can watch the comings and goings, in order to boost transparency.