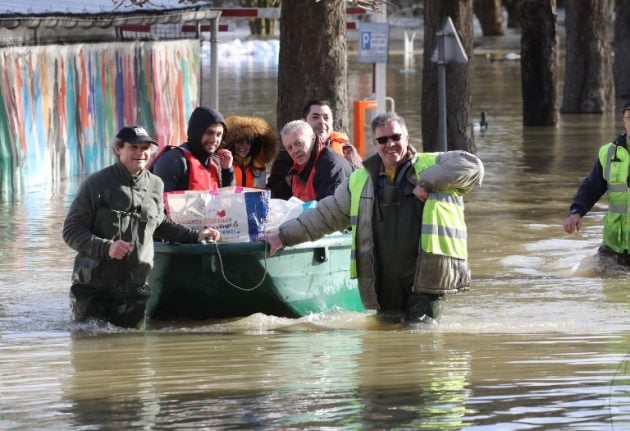 Municipal employees carry people in a boat to cross a flooded section of a street after the Marne river burst its banks. Photo: AFP
Some 275 towns and villages across France were officially recognised as “natural disaster” zones on Wednesday after last month's devastating floods.
A further 156 were waiting to find out whether they would be also be recognised as 'disaster zones' pending more expert advice, the government said.
The state of natural disaster is a special procedure set up in 1982 so the victims of exceptional natural events can be adequately compensated for damage to property.
Essentially once a zone is declared a natural disaster, victims can claim from a pot of funds created by all insurers. If the zone is not declared a disaster insurance companies are under no obligation to pay out.
The procedure means that the government will evaluate each area and deem whether it qualifies for the status of “natural disaster”.
What counts as a natural disaster?
A natural disaster includes floods, mudslides, wildfires, droughts, severe damage from storms, avalanches and earthquakes.
In mainland France, almost any natural disaster you can think of would be covered by this act, except for high winds, which are included in a specific “storm warranty”. Photo: AFP
What is insured?
Under a “state of natural disaster” residents are covered for all those goods and property that are directly damaged by the phenomenon, in this case floods.
It applies to residential or commercial buildings, furniture, vehicles and work equipment that are already covered by insurance policies.
Homes for example, must be already covered by a multi-risk insurance policy for the status of “natural disaster to count.
Caps are placed on the excesses that victims have to pay: €380 for private claimants for professionals it stands at 10 percent of the overall claim with a minimum of €1,140.
Vehicles would also need to be covered by a full policy, not just third party insurance.
Damage to soil, livestock and crops that were yet to be harvested fall under the agricultural disasters scheme and so are also excluded in this case. Photo: AFP
What steps should you take if you've been affected?
Those affected by floods have ten days starting from when the decree is passed to send their claim to their insurer by post. If possible, they should accompany it with evidence of damage. That could include photos and invoices for objects that have been damaged.
Specific details, such as the number of broken tiles or the height the water reached in each room, could also be helpful.
Insurers then have two months to pay the first part of compensation, and three months to fully recompense the victims. The insurer can also send an expert to estimate the damage.
What if my town is not officially classified as in a state of natural disaster?
If your town is not legally in a state of “natural disaster”, you'll have to follow different procedures. You should call your insurance directly to find out if your possessions are covered in case of storms or bad weather. If this is not the case, the expenses will be your responsibility.
by Marianna Spring/Evie Burrows-Taylor