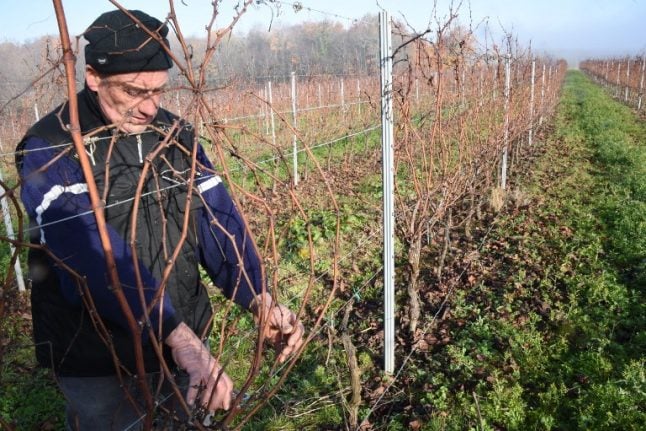 Wine grower Andre Faugere pruning his vineyard in November to limit frost damage. PHOTO: MEHDI FEDOUACH / AFP
“We have nine batches which are satisfactory but not enough to produce a Climens,” Nivelle says of the 2017 harvest. “It's a shame, it had a nice potential.”
It will be the first time since 1993 the estate has missed the annual vintage for its top drop, first awarded the Grand Cru classification in 1855.
With a harvest that slumped to just two hectolitres (about 44 gallons) from the usual 20 hectolitres, Chateau Climens will get by on stock of the 2016 vintage — though Nivelle said he was facing nearly an entire year's worth of lost sales.
Overall wine production in Bordeaux shrank 40 percent last year as vineyards found themselves coated in late frost twice at the end of April, ravaging the fragile shoots and buds that emerged prematurely following an unusually mild March.
But while some escaped unscathed, such as those in Medoc, others in Saint-Emilion were hit particularly hard. One out of five Bordeaux estates lost more than 70 percent of last year's harvest, according to the local agriculture council, mainly the lower-lying where the frost was most severe.
Climens lies on lower ground, while chateaux at higher altitude, including stars such as Yquem or Rieussec, were largely spared the damage.
Xavier Planty, president of the Sauternes-Barsac winegrowers' association, predicted “a magnificent vintage” for these lucky few, citing an ideal contribution from botrytis, or “noble rot”.
No insurance
Like most houses, Climens had not taken out insurance to cover frost damage. The prospect didn't seem worth the high cost, especially since the region hadn't seen a similar spring cold snap since 1991.
Even those that did insure have found that the policy coverage only goes so far. Chateau Guiraud, for example, won't be compensated after losing nearly 40 percent of its harvest because the method for calculating losses is based on average grape yields — which the rich Sauternes grapes hardly ever reach.
Overall, estates in the Sauternes-Barsac appellation lost half of the year's harvest on average, said Planty, a co-owner at Chateau Guiraud.
Bigger or well-known brands will get by because “the banks are standing by them,” he said. But of the 142 chateaux that make up the appellation, fewer than 10 are larger than 50 hectares (125 acres) — and the average has just five hectares.
As a result, between 300 and 400 small producers in the Gironde department which encompasses Bordeaux are facing an inability to finance their 2018 grape crops, according to the local SOS Vignerons Sinistres (Save Our Stricken Vineyards) association.
“As of January 3, banks are starting to pull back. They've been sending out letters demanding that short-term loans be paid back immediately,” or cutting off overdraft facilities, said association president Florence Cardoso. “People really don't know what to do.”
An ominous sign is the number of fields where vines haven't yet been pruned back in preparation for this year's crop — meaning their owners may have already thrown in the towel, especially those nearing retirement age with no obvious successor.
Others already know they won't make it.
“I was already in receivership; the frost put an end to things,” said a 40-year-old Bordeaux grower who asked to remain anonymous.
“Prices went up but not enough for me to make it. If they had doubled, that might have done it,” he said. “I lost 60 to 65 percent of my harvest, and I needed all of it to get out
of this hole. This just wasn't enough.”
By AFP's Alexandra Lesieur