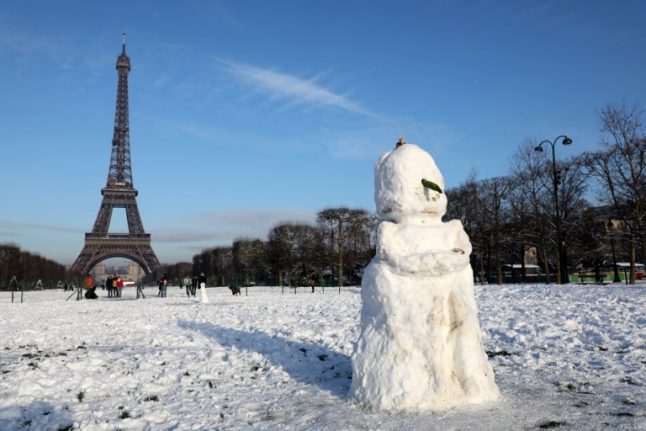 More snow is on the way for northern France and the Paris region, where transport ground to a halt this week after 15cm fell overnight on Tuesday.

The forecast has prompted police in Paris to warn drivers not to take their cars on Friday.

That's the fourth day running that motorists in the Île-de-France region have been urged not to get behind the wheel by authorities, in order to avoid the kind of traffic chaos that led to a record number of traffic jams on Tuesday evening as the snow fell.

“Motorists who take their cars on Friday morning, despite the presence of ice and the forecast of more snow must realise there is a risk they won't be able to use their cars to return in the afternoon or evening,” said the police.

According to the police department a new front heading in from the west will bring snow showers during the morning.

The front will bring rain to Brittany and Western France but that will turn to snow over Normandy as it heads towards the Paris region.

“This episode should result in between 4cm and 7cm of snow and up to 10cm in places,” said the police.

The new snowfalls will not just impact Paris but much of north and eastern France as the map in the tweet below shows.

Meteo France says the new episode of snow won't be as heavy as Tuesday night's but will begin on Thursday night and cover a large area of France, from Limousin to the Belgian border.

Later on Thursday Méteo France placed 27 departments on alert due to the snow forecast on Friday. On Thursday Météo France, the country's weather service said the cold and the freezing of the snow and slush mean there was a real danger of vehicles skidding on black ice.

And train services in the region were still not running as normal due to the freezing temperatures overnight. Weather forecast 7am-1pm Friday. Map: Meteo France
Temperatures in Paris on Friday are expected to reach lows of -3C and highs of 4C, meaning Parisians will be reaching for their woolly hats for a few days yet.